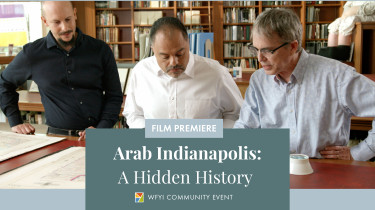 Join WFYI for the public premiere of Arab Indianapolis: A Hidden History, followed by a discussion with the film’s producer Edward E. Curtis IV.


This event is free to attend. Advanced registration is requested.

The documentary was underwritten by the Arab Indianapolis Foundation, Inc., and Indiana Humanities in cooperation with the National Endowment for the Humanities. The film was produced by Fisher Productions in association with Indiana University.

After viewing the documentary, the film's producer, Edward E. Curtis IV will be in conversation with local leaders from the Arab community in Indianapolis, including:

The premiere screening event will be held at Central Library (40 E St. Clair St.) in the Clowes Auditorium.

The Central Library has a paid parking garage available to patrons during their time at the Library. The garage can be accessed on Pennsylvania Street.