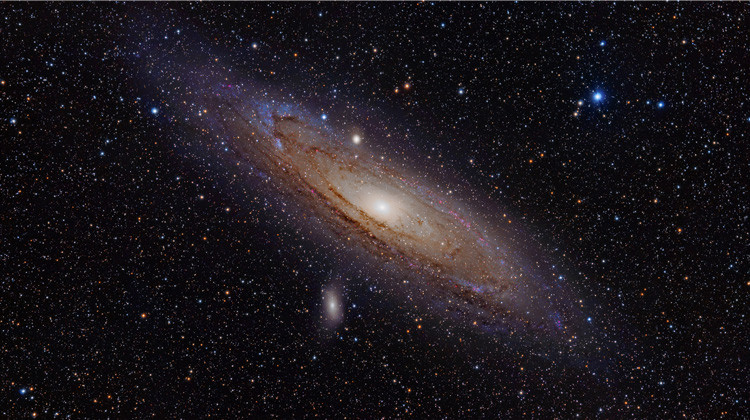 Image Info: The Andromeda Galaxy is a spiral galaxy approximately 2.5 million light-years away in the constellation Andromeda. - Adam Evans

Hiding in the northeastern sky this evening (August 23, 2019) is one of the most distant objects visible to the naked eye.  That is… if you’re under very dark skies, which are hard to find anywhere near the city. But you can see it under most suburban skies with just about any telescope, or even decent binoculars.

The Andromeda Galaxy lies two-and-a-half million light years from our own galaxy, the Milky Way. But it’s so big that it fills a space in our night sky bigger than the full moon. It’s just too dim to see without a little help.

Here’s how to find it. First, find Cassiopeia. You’ll recognize it as five stars that make a wonky sideways “W” in the northeastern evening sky. Then, identify its three brightest stars. They make a nearly right triangle at the top of the constellation. From there, find its brightest star, Shedar. It’s the point at the widest angle. Treat that star like the point of an arrow and follow across the sky to Alpheratz--the brightest star in the constellation Andromeda. Imagine a line connecting those two stars. Then find the center and scan down and to the right with binoculars or a telescope. Once you see what looks like dim cloud of light, you’ve found it.

And when you do, you’ll not only be seeing light that’s taken two-and-a-half million years to get here… You’ll also be looking at the core of a galaxy that’s more than twice the size of our own, measuring in at around a trillion stars.