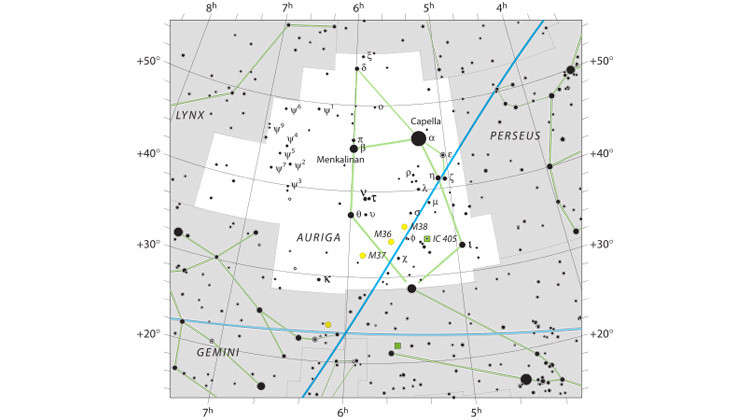 At this time of year, this evening’s target is high in the Eastern sky.

Auriga, Latin for Charioteer, is a constellation made up of just six main stars arranged in a sort of circle. It’s said to depict the legendary Athenian king Erichthonius (air-ee-THOHN-yos) holding a small goat on his left shoulder, and the reins of the chariot in his right hand.

The brightest star in Auriga, Capella, is the third brightest star in the northern celestial hemisphere behind Vega and Arcturus. Capella is latin for… little goat. And although Capella appears to be a single bright star, it’s actually an unusual system of four stars in two binary pairs.

To find Auriga, look high to the East before 10pm. Later than that it will be either straight up or high to the west. That bright star is Capella. The other five stars along with it form an imperfect hexagon. Now, if you have a decent telescope, you can look closer and find three open clusters. Messier 36, 37, and 38. The brightest and most interesting is Messier 37, which can be found between the star opposite Capella, Elnath, and Theta Aurigae (aw-RYE-gay).  Trace a line between those two stars, go to the center, and scan just outside of the constellation. It’ll appear as a fairly dense, but pretty dim open cluster of hundreds of stars.

Auriga has been known since the dawn of civilization. Mesopotamians called it GAM. To them, it, coincidentally, represented… a herd of… goats. And just so you know, ancient Sumerian, the language of the Mesopotamians… is in no way related to latin. Just something to ponder as you look up… this evening.