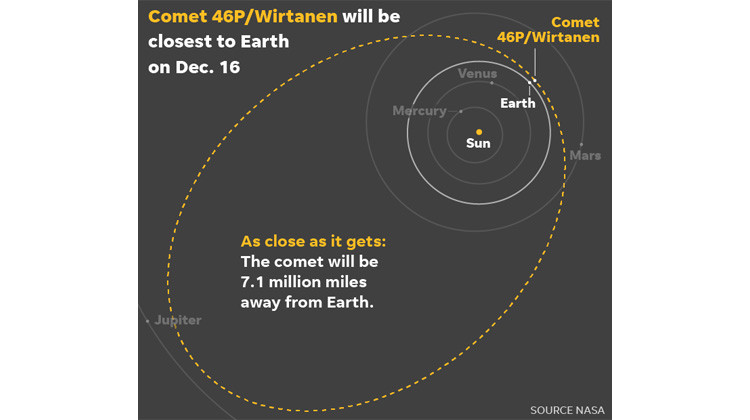 Comet 46P, also known as Comet Wirtanen after the man who discovered it in 1948—American astronomer Carl Wirtanen, will come close enough to Earth to be visible to the naked eye under dark skies. Those of us in the city and suburbs though will probably still need a telescope or binoculars.

Comet Wirtanen is part of the Jupiter family of comets, which means the farthest it travels from the sun is about Jupiter’s orbit… around 800 million miles. And it makes that journey around the sun and back about every five and a half years. This makes it what’s called a short period comet. Short in that it takes less than 200 years to make an orbit of the sun. Halley’s Comet is a short period comet, coming around every 76 years or so. Some comets take thousands, even millions of years to complete an orbit. Because of its frequency, Comet Wirtanen was the original target for the European Space Agency’s Rosetta Mission, but the spacecraft took too long to build, so they missed the launch window.

While this comet may orbit the sun more frequently than others, it very rarely comes close enough to see with the naked eye. Comet Wirtanen will be brightest on Sunday night, but it will be visible all weekend in the evening sky. Again, you might need the help of binoculars or a telescope unless you have dark skies.

You’ll find the comet between the Pleiades and Aldebaran, the orange eye of Taurus The Bull. Friday night it’ll be to the right of the two clusters. Saturday and Sunday night it’ll be right below the Pleiades. It’ll look like a dim greenish blue star with a halo around it.
If you see it, you’ll be looking at a comet that hasn’t swung this close to Earth in over 300 years.