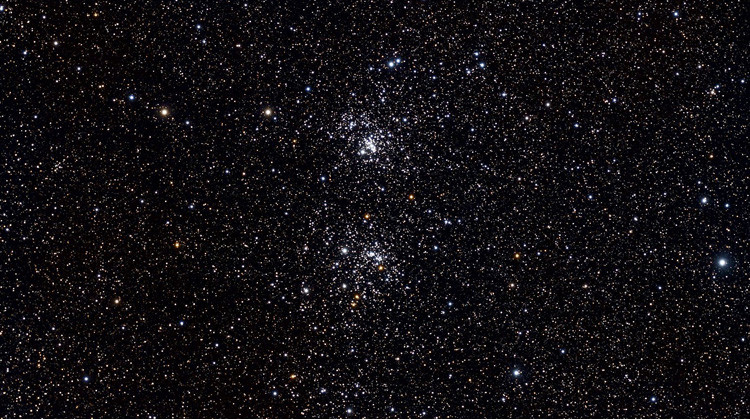 Tonight’s target has been known since LONG before the telescope was invented. This of course means it can be seen WITHOUT a telescope, but ONLY under very dark skies. And it wasn’t until the early 1800s that, THANKS to the telescope, it was identified as two separate clusters instead of one.

And here in the Northern Hemisphere, Double Cluster never dips below the horizon… so depending on your view, it’s out all night!

To find Double Cluster, look for Cassiopeia. You’ll find it in the northeastern sky in the evening. The later you’re out, the higher it will be... Cassiopeia looks like an elongated, oddly-proportioned “W.” Once you find it, look for the two stars closest together in the constellation. If the “W” were on its side, as it will be tonight, it’s the second and third stars from the bottom. Trace a line between those two stars, then scan down with binoculars or a telescope… following that same line. When you see a double cluster of stars, guess what… you’ve found it. Two brilliant clusters of mostly bluish white stars—but there are a few bright yellow and orange stars for variety.

When you find it, you’ll be looking at one of the younger star clusters you can easily find in the night sky… at only about 13 million years old. To give you an idea, Kangaroos evolved on Earth about two million years BEFORE these stars formed.