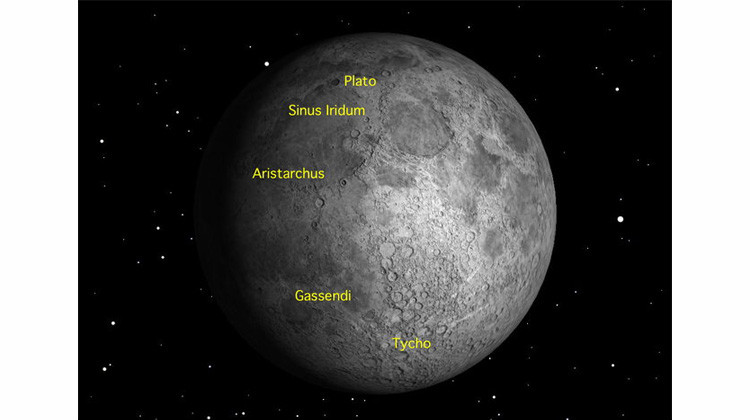 On Friday night, the Moon and Mars are right next to each other. And Neptune is nearby as well, but we can’t see it without a LOT of help.

On Saturday night, the mostly invisible Neptune is between the Moon and Mars to the south, and on Sunday, the gibbous moon drifts from the southeast.

Humans have observed the moon for as long as we’ve been able to look up. We’ve looked for meaning in the moon. In fact, the word “lunatic” comes from the belief dating back to the time of Aristotle, that the moon causes insanity in certain people. A belief still held by some today, but one that’s been disproven.

If you’re able, take a few minutes to observe the moon this weekend. A moon with a shadow is so much more fun to look at than a full moon in my opinion. The shadow helps accentuate textured features on the surface like craters and mountains. Grab a telescope, any telescope, and get a good look. If you don’t have a telescope, even an average pair of binoculars will show you a lot.

On Friday night, the shadow will cross the lowland craters at the moon’s south pole, including the prominent Tycho crater. That’s the big one with obvious rays of impact ejecta coming off of it.. Saturday night will also be a good night to view the south pole, but the lone Copernicus crater toward the middle of the moon will be particularly eye-catching. Sunday night the smaller but equally isolated Kepler crater will be just outside the shadow’s edge.

Now, if you’re a fan of the full moon you won’t have to wait long. We’ll be treated to a full moon on none other… than Thanksgiving night.