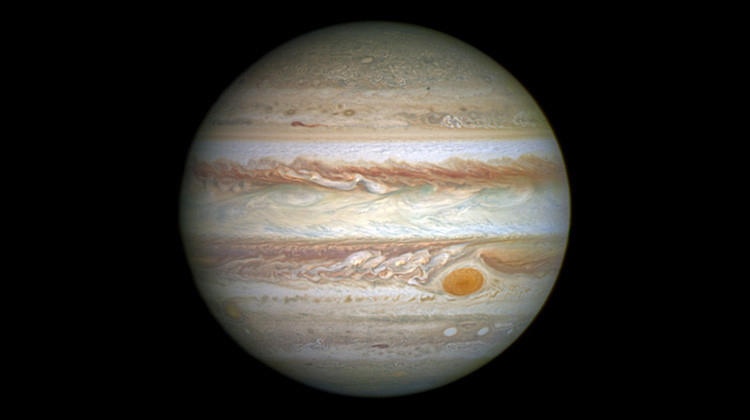 If you’re lucky, you’re spending your days… and nights in the AC. But if you have a good view of the southern sky, step outside for a few minutes and find the two largest planets in the solar system.

Jupiter has been in the evening sky since early June. And now Saturn is out early enough to enjoy too. This means two great targets for any size telescope… or the naked eye.

Let’s start with the easiest one. Jupiter is high, bright, and due south at 11pm. It’s hard to miss since it’s the brightest object in the night sky behind the moon. Once you find Jupiter, grab a telescope. Almost any telescope should show you its Galilean moons, Io, Callisto, Ganymede, and Europa. They’ll look like three or four points of light in an almost straight line around the planet. Larger telescopes can resolve even the cloud belts of Jupiter. And if you’re lucky enough, even the Great Red Spot. Your best chance at seeing that will be Sunday evening just after sundown when the Great Red Spot is dead-center, facing the Earth.

Scanning down and left, or east with the naked eye, you’ll notice a bright yellowish point of light that doesn’t twinkle. That’s Saturn. Most telescopes—even small ones, will show the rings. Larger amateur telescopes can resolve as many as seven moons around Saturn, as well as the Cassini Division—the split between its two most visible rings.

Observing the rings of Saturn from your own backyard can be transformative experience. Seeing details of an object more than a billion kilometers away is enough to hook almost anyone on astronomy.

So stay cool, but brave the nighttime heat to see two of the best summer targets. And don’t forget the bug spray.