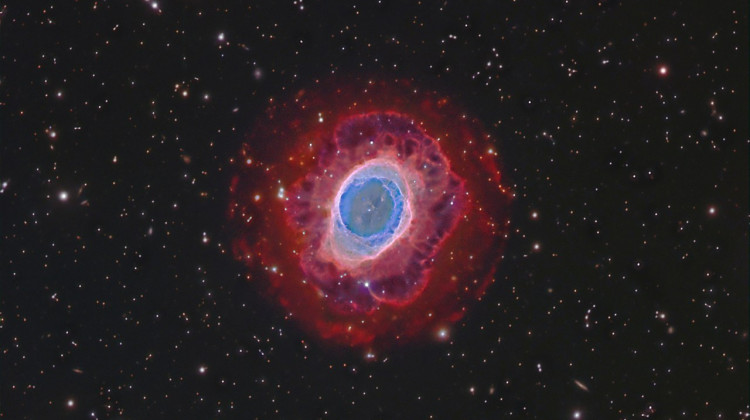 We’ve officially called it “Lyra” since the 2nd century when the astronomer and mathematician Ptolemy identified and catalogued it—and it was likely known as Lyra long before the time of Ptolemy. It represents the Lyre of Orpheus from Greek mythology.

To find it, look to the northeast after dark. The REALLY bright star is Vega, which is part of Lyra. But if you’re observing under urban or suburban skies, Vega is probably all you can see. For the rest, you might need binoculars or even a telescope. To see it, look at Vega with binoculars, and then scan down and look for four bright stars below Vega that form an elongated rhombus shape. That’s Lyra… a total of five stars… or six if you count the bright star to the left of Vega.

Now, if you DO have a telescope, there’s a deep sky object hiding in Lyra. The Ring Nebula is one of the best-known planetary nebulas. It was discovered in 1779 by French astronomer Charles Messier, who later added it to his catalogue of comet-like objects. Its official designation is Messier 57. You can find the Ring Nebula between the two stars at the bottom of Lyra. If Vega is at the top, these two stars make up the short side of the rhombus opposite Vega. The Ring Nebula is near the center between those two stars, but you’ll need a decent telescope to see it. For best results, you’ll need at least an 8-inch aperture.

If you see the Ring Nebula, you’ll be looking at the remnant of a red giant which expelled its outer gas layers long ago. Larger professional telescopes can resolve a dim white dwarf at the center, which was the core of the star it came from.