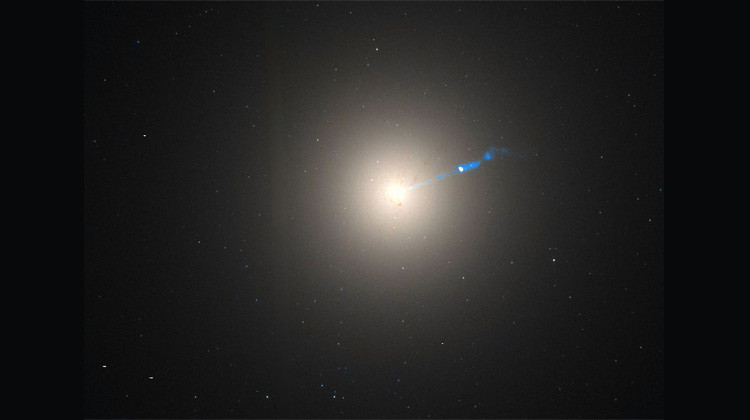 This week, scientists working with an array of radio telescopes that amounts to an aperture roughly the size of the Earth itself, released an image of the supermassive black hole at the center of M87, a supergiant elliptical galaxy that’s in the evening sky tonight.

M87, also known as Virgo A was discovered in 1781 by French astronomer Charles Messier, who’s known for his list of deep sky objects. M87 is part of the Virgo cluster of galaxies which, as the name suggests, are in or around the constellation Virgo, which rises from the east in the early evening and sweeps across the southern sky all night.

Now depending on when you observe, the location will change of course. But at 9:30, look to the east and find bright orange Arcturus. To the right, and a little lower on the horizon is Spica. Now look above those two stars and complete a big equilateral triangle with the star Denebola. From there, scan slowly down toward, but not quite to the center of that triangle. When you see one, or a series of very dim, fuzzy objects, you’ve found it. But which one is M87? Near M87 is also M84 and M86. Of those three, M87 is the brightest one, but not by much. The other two are practically right next to each other, with M87 below and to the left.

Now, if you don’t find it, don’t feel bad. These are VERY difficult to see, even with larger telescopes. But if you do see it, you’ll be looking at light that’s taken 53 million years to get here, and an enormous galaxy whose heart we can now see.