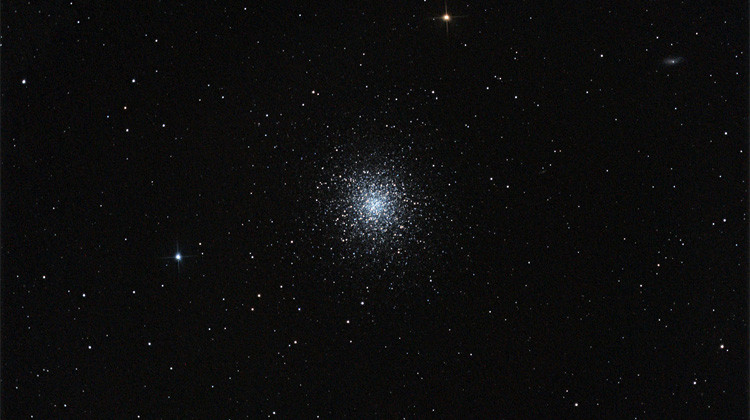 Image Info: Rawastrodata - With my telescope

Vonnegut’s 1959 novel, The Sirens of Titan, opens with a quote from his character Ransom K. Fern who says “Every passing hour brings the Solar System forty-three thousand miles closer to Globular Cluster M13 in Hercules—and still there are some misfits who insist there is no such thing as progress.”

A great opening… for a great book. Read it sometime. But let’s talk about Messier 13.

The Great Globular Cluster in Hercules, or M13 was discovered by astronomer Edmund Halley in 1714, and found its way into Charles Messier’s catalog of comet-like objects fifty years later. Under the right conditions… a moonless night, and very dark, clear skies, you can see the cluster with the naked eye. Most of us though will need a telescope.

To find the cluster, look high to the west after dark. The later it is, the lower and farther north it will be. There you’ll find the constellation Hercules, which can be identified by the oddly-shaped quadrilateral below the very bright star Vega.  Once you find the four stars that make up Hercules’ torso, find the one furthest to the right. Then, with your telescope, scan slowly toward the star at the bottom of the quadrilateral until you see what looks like a dim, fuzzy star. That’s M13, the Great Globular Cluster in Hercules.