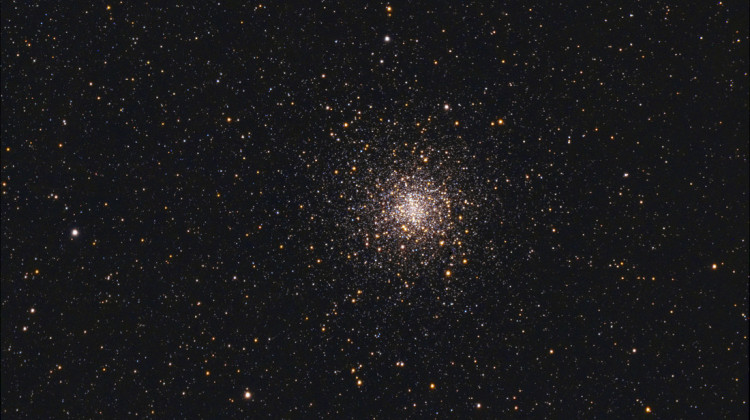 So maybe you got a small telescope and got bored with just looking at the moon and planets. Or maybe you’ve had one for a while, but don’t know what to look at? Believe it or not, even small telescopes can resolve a number of larger and brighter deep sky objects. Some of the best are globular clusters. Dense concentrations of thousands of stars bound by their own collective gravity. They’re almost like miniature satellite galaxies that form in the outer regions of their host galaxy. One of the largest, at least as it appears in our sky, is the globular cluster known as Messier 4.

Like most globulars, this one is ancient—even on the celestial scale. It began forming around 12 billion years ago. And like I said, it’s big in our sky. Almost as big as the full moon, but since it’s very dim, you need a telescope to see it.

To find it, look south to find Antares. It’s that bright orange star beneath and to the right of Jupiter, the brightest point of light in the night sky. When you find Antares, scan down and to the right. Once you see a fuzzy ball of light, you’ve found it. And just a reminder, that’s really all it will look like… a fuzzy ball of light. And it’s not as dense as many other globular clusters, so you may pass right by it and not notice it. Relax, move slowly, and don’t expect to be blown away visually. Just know that when you see Messier 4, you’ll be looking at tens of thousands of stars slowly collected over billions of years.