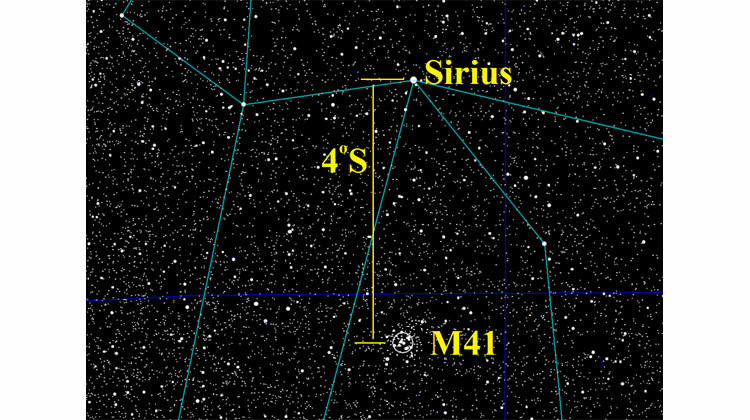 Sirius, glides low across the southern evening sky this time of year. It’s called the Dog Star because it’s at the heart of Canis Major, Latin for the Greater Dog. One of two dogs that follow Orion the Hunter.

Within the constellation sits a large star cluster—Messier 41. The only Messier object in Canis Major. From our perspective, it’s about as big as the full moon in the night sky. But under urban and suburban skies, it’s not only outshined by city lights, but by bright Sirius itself. However, to see it, you only need binoculars or a small telescope.

Here’s how to find it… first, find Sirius. It’s the brightest star in the night sky, but there are other bright ones too, so how do you make sure you have the right one? Well, Sirius is the bottom point of the Winter Triangle. A large, nearly perfect equilateral triangle in the southern sky that also includes Procyon in Canis Minor, and Orion’s right shoulder, the bright orange Betelgeuse. Now that you’ve identified Sirius, look at it through binoculars. Most binoculars should have a wide enough field of view to show both Sirius AND Messier 41, which is found below and just to the left of Sirius. If you only have a telescope, another way to find Messier 41 is to draw a line between Sirius and second-brightest star in Canis Major, Adhara, and follow just below that line starting from Sirius, and stop when you see a large, open star cluster. That’s Messier 41.

When you find it, you’ll be looking at a cluster 25 light years across, and 2300 light years from Earth, containing around 100 stars.