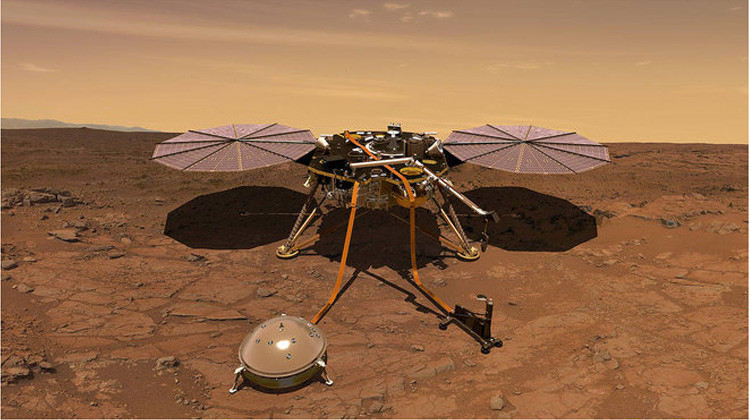 Image Info: An artist's interpretation of the InSight lander operating on the Martian surface. - Credit: NASA/JPL-Caltech

Let’s celebrate what we hope will be another successful landing... on the Red Planet.

It’s hard to believe it’s been six years since Curiosity successfully landed on Mars. Since then we’ve learned a lot from the rover… including the incredible discovery of complex organic molecules… hints that perhaps life once existed there… or maybe it still does. Curiosity is still operational and still gathering important data. But Mars is about to get another earthly companion.

On Monday, if all goes well, NASA’s InSight lander will touch down near the Martian equator and begin its two year mission to gather geological data. Unlike Curiosity, Sojourner, or Opportunity, this lander won’t have wheels. It’ll stay put… and for the first time ever, geologists will be able to record earthquakes… or rather… MARSquakes and send back the data to give scientists a sense of what the interior of the planet is like. We’re already pretty sure that, unlike on Earth, plate tectonics isn’t responsible for the geological activity… something else is at work. But we do know that it has volcanoes. In fact, it has the largest volcano in the solar system… Olympus Mons at 14 miles high. Compare that to Mount Everest at a paltry 5 and-a-half.

To celebrate the upcoming InSight landing, have a look at Mars this weekend. After all, it’s about the only thing we can see in the night sky, thanks to the nearly full moon that washes out everything else. Under clear skies, you should easily be able to see Mars in the southern sky. The later it is, the lower and further west it will be. It sets just after midnight. Mars looks like a bright orange star that doesn’t twinkle.