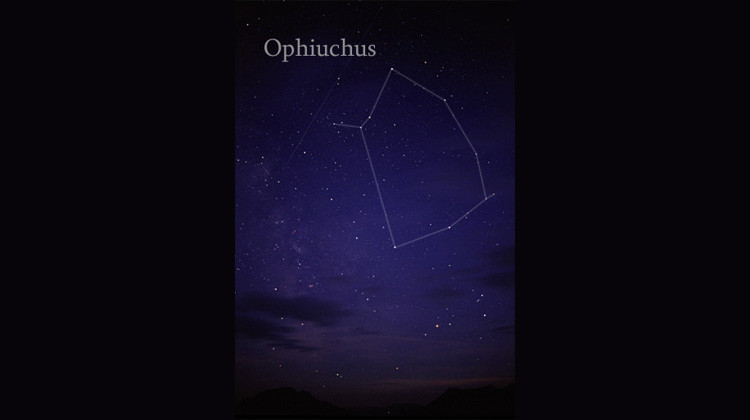 Image Info: Photography of the constellation Ophiuchus, the serpent bearer - Till Credner (http://www.allthesky.com/)

Jupiter is the brightest point of light in the evening sky this weekend. Above it is the constellation Ophiuchus. Greek for “serpent-bearer.”

With today’s light pollution, it is one of the dimmer constellations, which may explain why you may have never heard of it. That, and its challenging name. But Ophiuchus is a great constellation to use when hunting for deep sky objects, or DSOs—what I like to call “dim fuzzies.”

The most popular dim fuzzies are the Messier objects, after 18th century French astronomer Charles Messier. Distant objects like galaxies, globular clusters, nebulae… Messier catalogued all these objects because he was a comet hunter, and whenever he found a dim target, he’d check his charts, realize it was a stationary object, and get frustrated he hadn’t found a new comet. What he didn’t know was that his name would be forever tied to some of the most extraordinary objects in the universe.

Ophiuchus is home to seven messier objects—all globular clusters, which are among the oldest structures in the universe. Spherical gatherings of stars, bound by gravity, and collected over eons. You need a telescope to see one, and a good place to start is M9, near Sabik, one of the brighter stars in Ophiuchus that represents his right knee. It’s the one immediately above Jupiter in the sky. Find Sabik, then scan down and to the left. When you find what looks like a fuzzy, out-of-focus star, you’ve found it. M9 is a dense cluster, so you can see it with a small telescope.

When you see it, you’ll be looking at a cluster of stars that’s been around for 12 billion years.