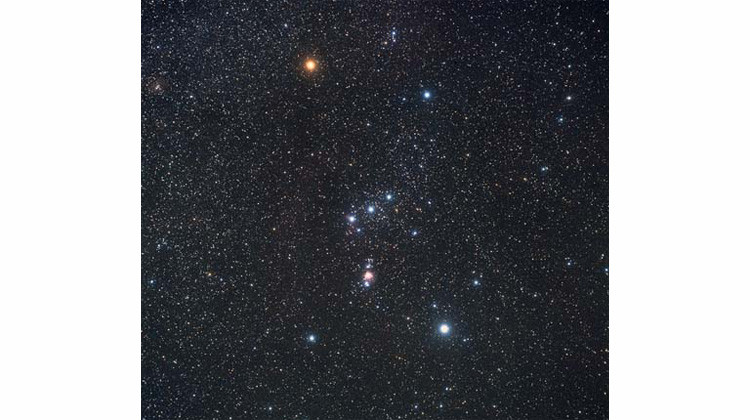 Look low on the eastern sky around 8:30 tonight and you’ll see it. It’s unmistakable.
Orion.

The three stars that make up Orion’s belt is the giveaway. But there’s a lot more to appreciate. Like Rigel… Orion’s bright blue left foot. Rigel is an enormous, hot star that’s actually part of a system of 3 to 5 stars, but we can only see the biggest, brightest one—Rigel A. Rigel is 20 times more massive than the sun, 80 times bigger, and tens of THOUSANDS of times brighter. It’s also young… only around 9 million years old.

But the biggest star in Orion is his bright orange right shoulder, one of the largest stars we know of. Betelgeuse. Betelgeuse is so big that if we were to swap it with our sun, its surface would reach beyond the orbit of Mars.

Now you don’t need a telescope to appreciate the brightest stars of Orion, but I’d get it out anyway… because the Orion Nebula has hooked so many people on astronomy. You can see it with almost any telescope. And we’ve learned a lot from it. The Orion Nebula is a stellar nursery. New stars form there from collapsing clouds of gas and dust. And almost everything we know about stellar nurseries came from studying the Orion Nebula. If you make a triangle with the center of the belt, Rigel, the left foot, and Saiph, the right knee of Orion, the nebula is right in the middle. You can’t miss it.

So tonight, bundle up, embrace the cold weather… and spend some time with Orion The Hunter.