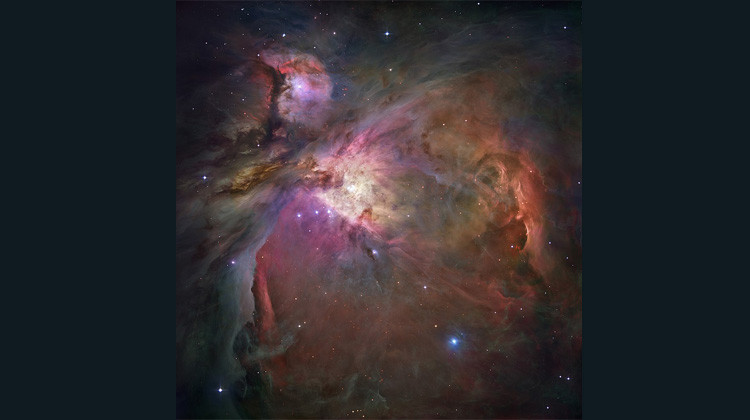 Stars form in huge clouds of gas and dust that some astronomers call “Stellar Nurseries.” The gas accretes or collects together, and as that body gains mass, its own gravity then causes it to collapse in on itself. Once there’s enough matter there, nuclear fusion begins, and a star is born. And much of what we know about star formation, we learned by studying the nearby Orion Nebula.

The Orion Nebula is just over 1300 light years from our solar system, and it’s believed to be an enormous 24 light years across. Because it’s so big, and… relatively close, it’s easily visible to the naked eye, even under bright, suburban skies.

You can find it this evening in the southern sky. Just look for the three stars that make up Orion’s Belt, and look below it for what looks like a smaller collection of stars. In the middle… is the Orion Nebula. Grab some binoculars or any size telescope for a better look.

Now, to you, it’ll just look like a fuzzy cloud around a few stars. But most photos you’ll find of the Orion Nebula are full of brilliant colors and detail. That’s the result of long exposures, or specialized equipment observing wavelengths we can’t actually see. But because astronomers are able to use those tools, we’ve learned so much about how stars are formed.

So if you see it this weekend, you’ll see a spot in the sky where countless stars… came to life.