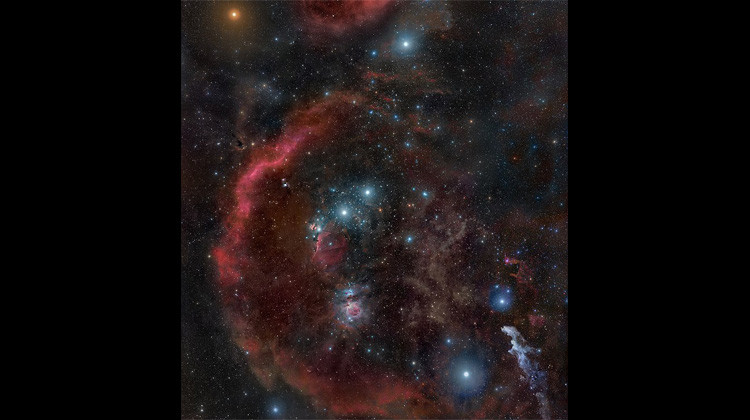 Image Info: Photo taken in October 2010 of the Orion constellation showing the surrounding nebulas of the Orion Molecular Cloud complex. The photograph appeared as the Astronomy Picture of the Day on October 23, 2010. - Rogelio Bernal Andreo

Orion is known among amateur astronomers as a constellation that hosts a trove of deep sky objects. But the rest of us just know it as... the one with the belt. The great thing about Orion though, is that you don’t really have to know what you’re doing to find lots of great targets. You can pretty much just scan the constellation with any size telescope and see a slew of open star clusters. One of the most famous deep sky objects, the Orion Nebula, is located below Orion’s Belt, where his sword might be. Look for it sometime.

But let’s talk about the belt. Lots of people can see just those three stars and know what they’re looking at. But look a little closer at the belt with a telescope, or even a good pair of binoculars, and you’ll see many more stars. An open cluster known as Collinder 70 is centered around the middle star, Alnilam (AL-nih-lum). Point your telescope right at it and you’ll notice a smattering of bluish stars surrounding it.

And bright Alnilam itself is a pretty interesting star. The brightest and most well-known stars in Orion are the red supergiant Betelgeuse, Orion’s right shoulder, and the blue supergiant Rigel, the hunter’s left foot. But Alnilam is also a blue supergiant. And some estimates put it at over 60 times the mass of the sun, which is far more massive than any of the other bright stars in Orion.