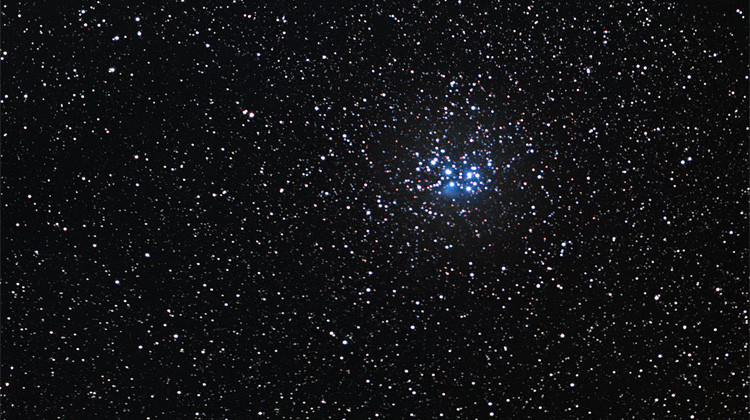 I’m Matt Pelsor… and this is your Weekend Sky Report.

Observations of the bright, open cluster known as The Pleiades have been recorded since the 17th century BC, and likely even before that. It was scientifically and spiritually significant to many ancient cultures across the globe, and continues to educate and inspire observers today.

The Pleiades is a collection of B-type stars, which are bright, hot, and blue in color. And the stars of the Pleiades are close too—around 450 light years away, which contributes to its brightness. And while you don’t need a telescope or even binoculars to appreciate the Pleiades, it certainly helps.

The Pleiades is also known as the Seven Sisters, after the seven daughters of Atlas and Pleione in Greek Mythology. Observers with good eyesight under dark skies will count seven stars in the cluster. It wasn’t until Galileo looked at the Pleiades through his telescope that dozens of other stars were discovered. Since then, further scientific observations and subsequent calculations have estimated over a thousand stars in the cluster.

To see the Pleiades for yourself, look to the eastern sky in the evening—the later it is, the higher it will be. To the naked eye under suburban skies, it could be confused as a small cloud. Under darker skies, it’ll look more like a star cluster. Once you find it, grab your binoculars or a telescope. Once you look at the Pleiades with a little help, you’ll quickly realize why this star cluster has captured the human imagination for thousands of years.