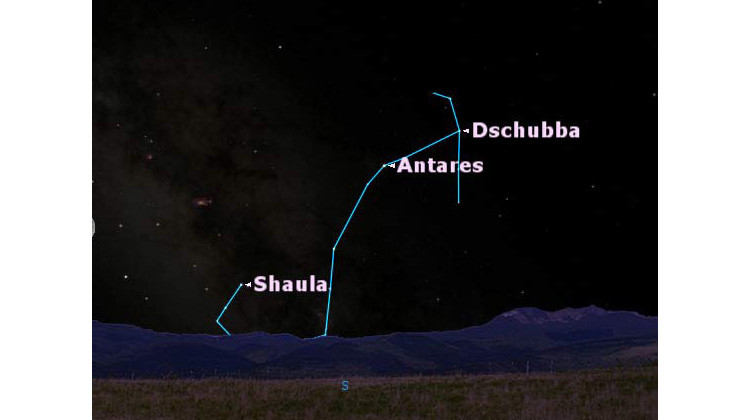 There’s a story in Greek mythology about Orion the hunter bragging to the goddess Artemis that he would kill every animal on Earth. Artemis then decided Orion’s ego had to be curbed, so she summoned a scorpion to battle Orion. The battle was so epic that it caught the attention of Zeus. In the end, the scorpion killed Orion. Zeus was so entertained by the fight that he raised the scorpion to the heavens to commend its victory. Then he raised Orion as a cautionary tale to all those who might be a little too braggadocios.

The victor of that fight creeps along the southern sky on summer nights.
Scorpius… is easy to spot… just look for its brightest star, Antares, which some call the heart of Scorpius.

Bright orange Antares is classified as a red supergiant. It’s so big that if you were to place it at the center of our solar system, its surface would reach beyond the orbit of MARS.

And speaking of Mars, Antares’ name essentially means “rival of Mars” Ant-ares, Ares of course being the greek god of war… but the planets are named after Roman gods… the Roman god of war is of course Mars.

And it’s the rival of Mars for good reason… it’s bright like Mars, and it’s ORANGE like Mars.

To find Antares, look south after sundown. That bright orange star is Antares, and the spray of stars above and to the right symbolizes the scorpion’s head and pincers. Curling below and to the left of Antares are the stars that make up the scorpion’s tail.

In the winter, Orion hunts… but in the summer, he retreats from his former rival… Scorpius.