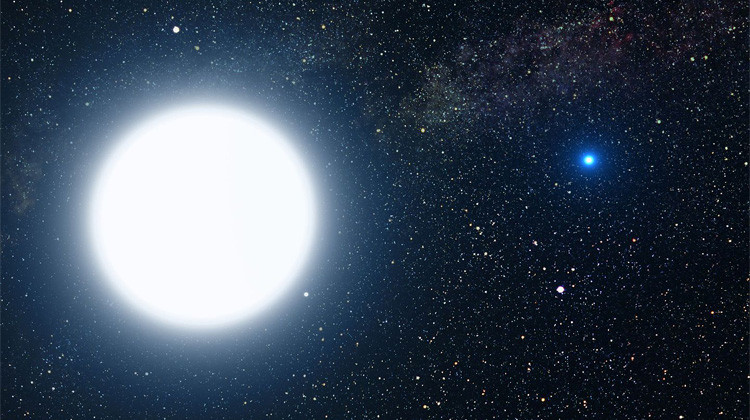 Image Info: Artist's impression of Sirius A and Sirius B. Sirius A is the larger of the two stars. - NASA, ESA and G. Bacon (STScI) - http://www.spacetelescope.org/images/heic0516b/

During the winter, Sirius is very prominent in the evening sky. It’s part of what’s called the Winter Triangle, a near-perfect equilateral triangle of bright stars that moves east-to-west across the southern sky at night. If we’re lucky, and the sky clears just enough to see all three stars of the winter triangle to the southeast, we’ll be most likely to see its brightest corner, the one closest to the horizon, Sirius.

Now, like so many of the stars in the sky, Sirius is not alone… It’s a binary system consisting of the very bright, main sequence stage star we can see with the naked eye, Sirius A, and a much smaller companion white dwarf stage star, Sirius B. Now, you won’t be able to differentiate the two unless you have a really big telescope under exceptionally dark, clear skies. In fact, Sirius B wasn’t discovered until the mid 19th Century. And, while Sirius A, the one we can see, is bright and shiny, Sirius B is pretty interesting too… It’s a white dwarf, so it’s really just the core remnant of a star. But it’s really massive for a white dwarf… imagine a star about the size of Earth… that’s actually slightly more massive than the sun. That’s Sirius B.

Sirius B used to be a lot bigger. Where the bright Sirius A is about twice as massive as our sun, Sirius B used to be 5 times as massive. But again, that was a long time ago. Since then, it has swelled to a red giant, and shed its outer layers into space, leaving one of the more massive white dwarfs we know of.