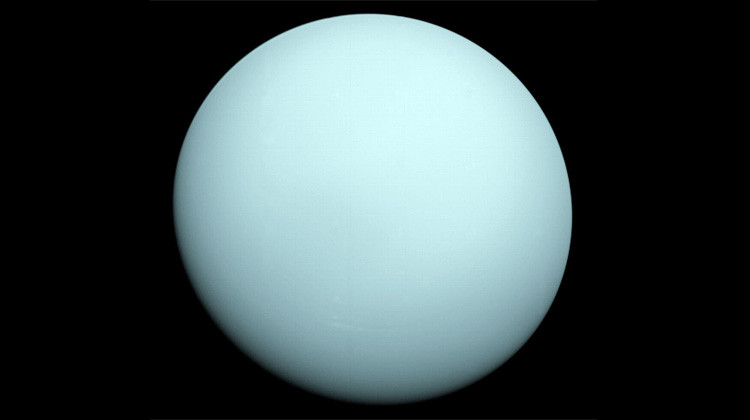 Image Info: This is an image of the planet Uranus taken by the spacecraft Voyager 2 in 1986 - - NASA/JPL-Caltech

Mars is bright and easy to spot in the western sky until the beginning of summer. But for the next few days, you can use Mars to spot the 7th planet… the ice giant Uranus.

Now, disclaimer… you may need access to a halfway decent telescope to see it. A very small or toy telescope probably won’t cut it for this one. It might if the moon weren’t also out in the evening, but it is… and it’s big and bright, so it’s washing out a lot of the dimmer targets.

But if you have a telescope, here’s what you do. Find Mars. It’s that bright orange dot in the western sky in the evening. The later it is, the lower it’ll be. Once you find Mars, scan straight down very slowly until you see a pale turquoise-colored dot. And there it is.

Even though Uranus wasn’t discovered to be a planet until the late 18th Century, it was almost certainly observed before then… Ancient greek astronomers may have mistaken it as a star, as did 17th Century English astronomer John Flamsteeed. But in 1781, William Herschel observed it and initially recorded it as a comet. But upon further observation, determined it to be a planet beyond Saturn.

Uranus is on its side compared to other planets. And it was long hypothesized that this was the result of a giant collision. It wasn’t until recently that this was looked at more closely. Research done at England’s Durham University suggests that somewhere between 3 and 4 billion years ago … an object larger than Earth hit Uranus, effectively knocking it over.

So tonight, find Mars… then scan down to see a planet that’s more than a billion and a half miles away.