VERNON, Ind. (AP) — A southeastern Indiana sheriff says a wave of drug overdoses that killed one person and left 14 others hospitalized was caused by heroin that may have been laced with a powerful painkiller.

Driver tells The (Columbus) Republic the heroin was apparently laced with fentanyl or another unknown substance. Fentanyl is a synthetic opioid 50 times more potent than heroin that's responsible for a recent surge in overdose deaths in some parts of the country.

Toxicology tests will be performed on a Jennings County woman who died to determine what substance she consumed.

Tags:heroindrug overdoseopioid antidotedrug addictionopioid overdoseopioid epidemicJennings Countyfentanyl
Support independent journalism today. You rely on WFYI to stay informed, and we depend on you to make our work possible. Donate to power our nonprofit reporting today. Give now.

Hearing Set On Whether Indiana Governor May Sue Legislature

Republican Gov. Eric Holcomb asked a judge in April to block the new law passed by the GOP-dominated Legislature following criticism from many conservatives over COVID-19 restrictions that Holcomb imposed.
Read More

Scott County's needle exchange program has been credited with slowing the severe HIV outbreak that rocked the rural county in 2015, and is now seen as the national benchmark for how similar programs should operate. It will stop operating Jan. 1, 2022.
Read More

Gov. Eric Holcomb is ending the majority of remaining COVID-19 restrictions Tuesday and all state executive orders issued during the pandemic will be repealed at the end of June.
Read More 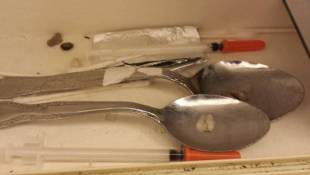 Heroin and fentanyl overdoses more than doubled between 2014 and 2015 in Indianapolis, and the use of the opioid overdose antidote Narcan is on a record pace this year.