Across Indiana, demonstrators joined a nationwide candlelight vigil called Lights for Liberty. There were 10 cities in Indiana officially part of the simultaneous demonstration, though others hosted similar vigils at the same time.

About 300 people gathered at the Elkhart County Courthouse in Goshen Friday. Demonstrators wrapped themselves in foil blankets, similar to those used as blankets in migrant detention centers. They also shared stories of migrants in front of the courthouse.

"Know that there was nothing inevitable about the humanitarian crisis on the border," Koop says. "It was fabricated by an administration that wants us to fear immigrants and believe we are incapable of humanely processing refugees. What is happening is intentional. It is a manufactured crisis and it is abhorrent.”

More than 150 people gathered outside an Immigration and Customs Enforcement office in Indianapolis Friday to protest migrant detention camps and call for immigration reform.

Many of the demostration’s speakers pointed to allies to do more in response to the migrant detention camps at the border.

Yazmin Aguilar is a member of the Indiana Undocumented Youth Alliance. She is a DACA recipient who has lived in the U.S. for 15 years and says allies who are citizens have to be willing to use the privilege of citizenship to put pressure on their elected officials.

“Calling your reps, right? So that’s a power that I don’t have," Aguilar says. "But I am hoping whoever is standing here, will call their reps. And when it comes to voting, they will vote every single election.”

Other speakers echoed Aguilar’s call to action. Malkah Bird, with Jewish Voice for Peace Indiana, says she hopes vigils like this and others in Indiana, more than 1,000 miles away from the southern border, spurs action.

“My only hope is that it’s not limited to tonight," Bird says. "That we don’t show up for one action on a Friday night and think that we have–we’re done. That our work is done.”

During her speech, she said gathering on a Friday night had more significance for her because it's the beginning of the Jewish Sabbath, a day of rest. But this current crisis is a call to action, and she says it mirrors the Holocaust of World War II.

“Make no mistake, these are concentration camps. We are facing what was faced by refugees during World War II. And to learn the lesson of the 20th Century and of the Holocaust means we have to take action right now,” Bird says.

The demonstration advocated for sweeping immigration reform. As a DACA recipient, Aguilar cautioned against criminalizing people like her parents. She says they fled to the United States to escape violence.

"If you were to ask me, that: I could get myself a legalized status if my parents were criminalized, I would say no," Aguilar says. "I would prefer 10,000 times to be deported myself, than to actually have others criminalize my parents."

During the candlelight vigil, demonstrators read the names of children who died at migrant detention camps, and families who had died trying to cross into the country. 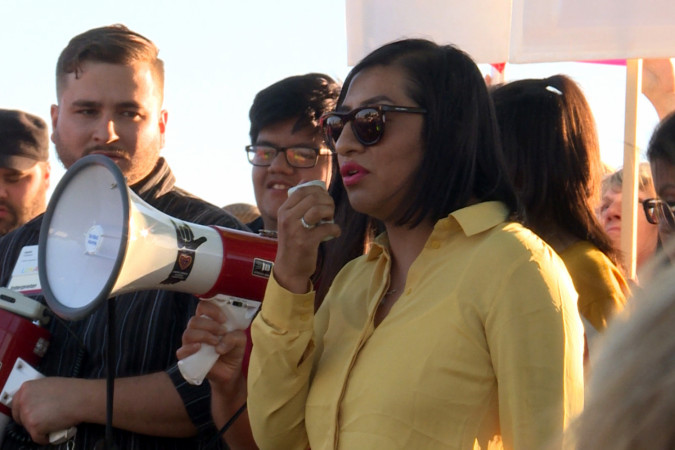 Tags:migrant crisismigrantimmigrantundocumented immigrantsundocumented students
Support independent journalism today. You rely on WFYI to stay informed, and we depend on you to make our work possible. Donate to power our nonprofit reporting today. Give now.