Carolyn Kelso and her husband Robert live in a big house north of Indianapolis, with original paintings on the wall and furry throws on the furniture. Carolyn herself is 71, with short blonde hair and stylish chunky black glasses.

She and her husband take their health seriously, and her mother suffered from the Alzheimer’s, so she noticed right away when something was wrong.

She was diagnosed as being in the first stages of the disease. Because she was diagnosed so early on, she was perfect for a late-stage clinical trial of Eli Lilly’s Solanezumab, a medicine that aimed to reduce symptoms in patients with mild dementia due to Alzheimer’s.

If successful, Solanezumab would be the first disease-modifying treatment for Alzheimer’s, a disease that affects more than 5 million Americans. Eli Lilly hung hopes on the drug, which could become a pharma blockbuster in the vein of Prozac or Viagra.

After she started the study, Carolyn Kelso was thrilled. She said she and her loved ones saw results right away.

“All that kind of faded away,” Carolyn Kelso says. “Or, it didn’t get worse.”

Carolyn traveled down to Indianapolis every month for a year and a half. She loved it. She’d chat with the doctors, meet up with friends downtown for lunch.

And then, the day before Thanksgiving, a stomach-dropping development:

“One morning I see the newspaper and they start talking about this drug,” says Robert Kelso. “[I thought]: ‘that’s our drug!’”

Solanezumab had failed the trial Carolyn had taken part in, making national and international headlines.

Robert Kelso started reading everything he could.

“Medical journals… everyone was writing about it,” says Robert. He was baffled. “We had such high hopes because we knew what her results were.”

Carolyn had expected to simply keep on receiving treatment after what she thought would be Sola’s inevitable success, going down to Indianapolis for the infusions and lunch dates.

About 10 days before at Lilly, a similar scene of disappointment had played out.

A small group of people high up in the company had learned about Sola’s less-than-optimal results. Instead of reducing cognitive decline by 30 percent, as the company had hoped, it only reduced it by around 10 percent, not enough to qualify as successful. If the drug had been more effective, it would have moved forward for approval by the Food and Drug Administration.

The results had to be kept secret until they were verified, says Eric Siemers, an Eli Lilly medical fellow who was one of the first learn about the trial outcomes.

Meanwhile, Lilly was buzzing, doing market research on how to launch the drug once it cleared the FDA.

Lilly Vice President of Global Alzheimer’s Disease Phyllis Ferrell says the company sent out an announcement to the press early in the morning the day before Thanksgiving.

“None of us felt good about a team working over the holidays knowing full well those submission documents were unlikely to get used,” she says.

In her words, there were a lot of tears. Siemers says some researchers had worked for a decade on this single molecule.

“After you’ve put a lot of your own blood sweat and tears into one of these programs — it’s been a little bit tough on people,” says Siemers.

“It made for a very somber Thanksgiving,” says Ferrell.

On a freezing December day about a month after the announcement, the mood at Lilly’s Indianapolis headquarters is still subdued. On the Alzheimer’s floor, banners co-signed by members of the company’s biomedicines team hang on the wall: “we know you might need a hug,” they read, “and we’re here to give it.”

But Siemers and Ferrell insist there’s a silver lining. The fact that Solanezumab appeared to work — even a little bit — indicates that Lilly researchers were on the right track.

“If we agree that we did move the needle, just not very much, then that would suggest that with more potent medications we could move the needle enough to make it a worthwhile medicine,” says Siemers.

Ferrell says administering the drug sooner in the disease and potentially in a larger dose, could have more of an effect: “We just had too small of a hammer for too big of a nail.”

Some scientists have expressed concern Lilly is only seeing what it wants to see.

Sola works by targeting a protein called beta-amyloid that creates plaques in the brain of people with Alzheimer’s. But other similar amyloid-targeting drug trials have had disappointing results. There’s a growing consensus within the scientific community the plaques are just a piece of the puzzle, and therapy will eventually involve a whole raft of treatments.

And because the plaques occur decades before many are diagnosed, Lilly sees early detection and prevention as a key to what eventual therapy will look like. Sola is the subject of three other trials that test its effectiveness in people who don’t yet show symptoms.

“The plaques are present probably 15 to 20 years before you have any symptoms at all,” says Siemers. “And actually, the amount of plaque doesn’t correlate very well to how much change in cognition or memory you might have.”

Siemers says this suggests Sola could be instrumental in preventing symptoms before they occur if it’s administered to people who have plaques but are still asymptomatic.

The same worries about seeing what’s not there are also plaguing the Kelsos back in Carmel. Carolyn Kelso wonders: was it all in her head? At the time of the interview, Carolyn didn’t even know if she had taken a drug or a placebo.

“The placebo effect, maybe it’s there,” she says. “But it’s the most dramatic one I can imagine.”

And her husband Robert is worried about not seeing what he’s used to.

“If she can’t remember who I am …do I still love her?” he says. “I do, but I love her brain too. And that’s the scary part to me. What happens when I come home and she looks at me like, ‘who are you?’”

For now, The Kelsos are hoping to find another clinical trial for Carolyn.

Tags:Eli Lilly and Co.Alzheimer's diseaseSolanezumabSola
Support independent journalism today. You rely on WFYI to stay informed, and we depend on you to make our work possible. Donate to power our nonprofit reporting today. Give now. 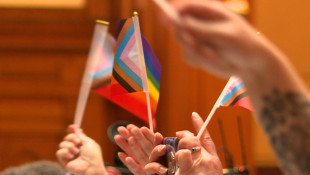 Hoosiers gathered at the Statehouse Monday to protest bills targeting LGBTQ+ youth. None of the nearly two dozen bills identified have received hearings yet but activists are worried. 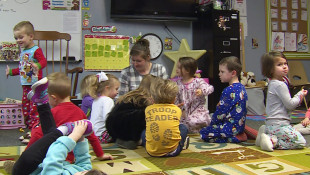