Sixteen of the residents at the Bethany Pointe Health Campus in Anderson had tested positive for the disease caused by the coronavirus pandemic and the other eight had compatible symptoms, Commissioner Dr. Kristina Box said during a state news briefing on the pandemic.

The new total at the facility is more than double the 11 deaths that Box had reported Monday.

Meanwhile, Indiana’s total death toll from COVID-19-related illnesses surged by more than 20 percent on Friday as state health officials reported another 55 deaths, pushing the state’s toll during the pandemic to 300 deaths. Not all of the Bethany Pointe deaths were included in the new daily toll, Box said.

Health officials could not say for certain how many other Bethany Pointe residents had tested positive for COVID-19 or how many were hospitalized with the disease.

Nursing homes across the country have been on lockdown for weeks under federal orders to protect their frail, elderly residents from the coronavirus, but a wave of deadly outbreaks nearly every day since has suggested the measures including a ban on visits and daily health screenings of staffers either came too late or were not rigorous enough.

Though the federal government has not been releasing a count of its own, an Associated Press tally from media reports and state health departments indicate at least 2,500 deaths have been linked to coronavirus deaths in nursing homes and long-term care facilities nationwide.

Box also reported a partial ethnic breakdown of Indiana's COVID-19 cases. Nearly half of Indiana cases have been among whites, 18.5 percent were among African-Americans blacks and about 3 percent among Hispanics, she said.

The pandemic also is taking a toll on the state's finances. Through February, state revenues were up by $100 million over estimates for the first eight months of the current fiscal year, but came in 6 percent, or about $70 million, below projections in March, said Cristopher Johnston, director of the state's Office of Management and Budget.

April historically has been the largest revenue month for the state, but that won' be the case this year, Johnston said.

Gov. Eric Holcomb's stay-at-home order has meant lower sales tax revenues and higher unemployment among restaurant and other hospitality workers, and income tax deadlines have been pushed back to July. Casino closings are leading to “significant” revenue losses, Johnston said.

“We do know the descent will be steep and rapid,” he said.

The 55 deaths statewide reported by the Indiana State Department of Health was the largest number the agency has reported to date in its daily pandemic updates, followed by 42 deaths the state agency reported Thursday. Friday's update boosted Indiana's total deaths about 22 percent from Thursday's tally of 245 deaths.

An additional 568 Hoosiers had confirmed cases of COVD-19 — the respiratory disease caused by the virus, raising Indiana’s total confirmed cases to 6,907 following corrections to the previous day’s total, the department said.

Marion County, the home of Indianapolis, again had the most new COVID-19 cases, at 202, increasing its total to 2,600 — or about 38 percent of Indiana’s total. Central Indiana's Madison County had 57 new cases and northwestern Indiana’s Lake County had 53. Seven other Indiana counties had 10 or more new confirmed cases.

The health department said 35,040 Indiana residents had been tested for the coronavirus as of late Thursday. 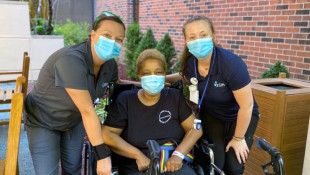 Across the Midwest, COVID-19 cases are rising. And some survivors are still recovering months after coming down with the disease. Karen Campbell is one of them.
Read More 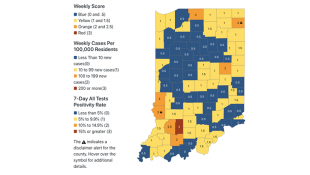 The state health department will now assign scores to all 92 counties based on the number of new cases per 100,000 residents and the percentage of tests confirming COVID-19 infections.
Read More