The Archdiocese of Indianapolis is defending a school’s decision to fire a married gay teacher.

School officials at Cathedral High School said this week the archbishop made clear it had to cut ties with the teacher or separate from the Catholic Church.

“So if we work for the church we certainly are expected to convey and be supportive of church teachings not only in our classrooms and in our schools but in the way we live our lives,” Fleming says.

Archbishop Charles Thompson says the Church tries to work with people in situations that conflict with Catholic teachings. But for employees, he says it draws a line at a public same-sex marriage or formal union.

“It’s not about orientation here it’s about a situation that may be contrary to the church’s teaching that we are addressing,” Thompson says.

Thompson says he doesn’t seek out details about teachers’ personal lives. He says he and other Church officials assume “good faith” unless provided with other information.

The Archdiocese faced increase scrutiny following a similar situation last year at Roncalli High School. A guidance counselor, Shelly Fitzgerald, was placed on administrative leave after school officials were provided documentation about her marriage to a woman.

Later Thursday afternoon, a crowd gathered outside of the Archdiocese of Indianapolis to protest the firing. Students organized to pray for their school and urge change in the Catholic Church.

Ethan Marasco will be a junior at Cathedral High School this fall, where a teacher was fired this week for being in a same-sex marriage. Marasco is one of more than 100 people who gathered for a prayer vigil to protest the decision outside of the Indianapolis Archdiocese. He says he also identifies with the LGBTQ community, and has no plans to leave his religion behind.

“I see my future to stay in the Catholic church and celebrate my sexuality. It’s not one or the other,” Marasco says.

“Being a teacher at a school and being fired should not be based on who you decide to be with at home but rather the content of your character,” Thorpe says.

The Archdiocese has said this policy applies to all of the schools under its umbrella, covering 38 counties and nearly 70 schools.

Casey Hayes is a professor at Franklin College and went to Cathedral High School. He says he left the Catholic Church because he felt there was no place for him there as a gay man. He recently returned his diploma to the high school, because he says he was ashamed of the school’s decision.

“I don’t want to be associated with a school that instills those kind of values on their kids. Because when I went there that wasn’t what they instilled on me,” Hayes says.

Students say they'll continue to organize to keep the conversation going about reform in the Archdiocese. 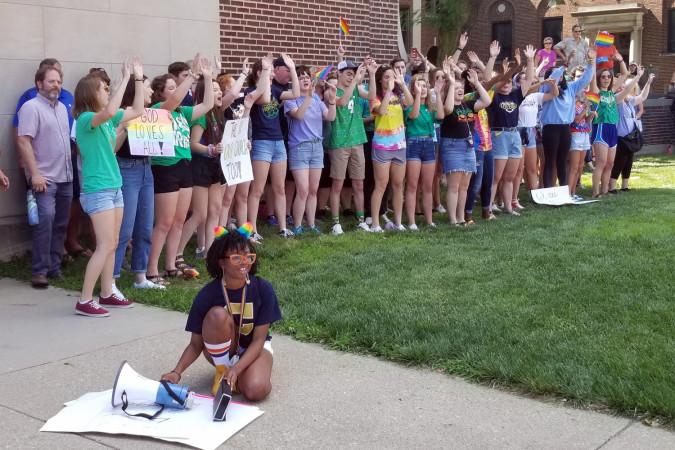 Tags:Archdiocese of IndianapolisCathedral High SchoolRoncalli High SchoolBrebeuf Jesuit Preparatory SchoolCatholic Church
Support independent journalism today. You rely on WFYI to stay informed, and we depend on you to make our work possible. Donate to power our nonprofit reporting today. Give now.