As Aid Checks Go Out, Farmers Worry Bailout Won't Be EnoughWhile support for President Donald Trump is near unwavering in the heartland, some growers say that with the November election nearing, such disappointing aid outcomes could potentially affect their vote.urltarriffs, soybeans2018-09-24T00:00:00-04:002018-09-24T00:00:00-04:00 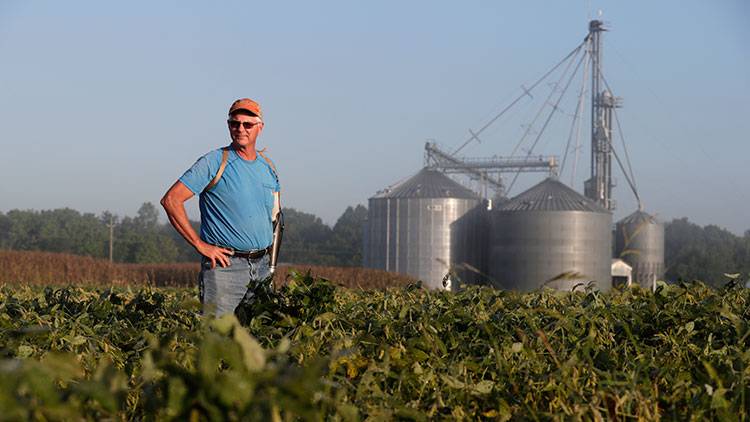 Jack Maloney looks over one of the soybean fields on his Little Ireland Farms in Brownsburg, Ind., Wednesday, Sept. 12, 2018. Maloney, who farms about 2,000 acres in Hendricks Count, said the aid for farmers is "a nice gesture" but what farmers really want is free trade, not government handouts. (AP Photo/Michael Conroy)

But even those poised for big payouts worry it won't be enough. And while support for Trump is near unwavering in the heartland, some growers say that with the November election nearing, such disappointing aid outcomes could potentially affect their vote.

"It's pretty obvious that the rural agriculture communities helped elect this administration, but the way things are going I believe farmers are going to have to vote with their checkbook when it comes time," said Kevin Skunes, a corn and soybean grower from Arthur, North Dakota and president of the National Corn Growers Association.

Corn farmers get the smallest slice of the aid pie. Corn groups estimate a loss of 44 cents per bushel, but they're poised to receive just a single penny per bushel.

"If these issues haven't been resolved, there could be a change in the way farmers vote," Skunes said. "A person has to consider all things."

Farmers are already feeling the impact of Trump's trade tiffs with China and other countries. China has hit back hard, responding with its own set of tariffs on U.S. agricultural products and other goods.

The Trump administration is providing up to $12 billion in emergency relief funds for American farmers, with roughly $6 billion in an initial round. The three-pronged plan includes $4.7 billion in payments to corn, cotton, soybean, dairy, pork and sorghum farmers. The rest is for developing new foreign markets for American-grown commodities and purchasing more than two dozen select products, including certain fresh fruits and vegetables, nuts, meat and dairy.

Agriculture Secretary Sonny Perdue announced last month that soybean growers will get the largest checks, at $1.65 per bushel for a total of $3.6 billion. China is the world's leading buyer of American soybeans, purchasing roughly 60 percent of the U.S. crop. But since Beijing imposed a 25 percent tariff on soybean, imports prices have plunged.

The lack of initial detail about how the calculations were made left farmers scratching their heads.

Asked about the confusion, Rob Johansson, the Agriculture Department's chief economist, responded that the USDA took into account a number of factors "including the share of production that is exported and the value of trade directly affected by the retaliatory tariffs."

"The level of damage is not the same for each commodity," he said in a written response to questions submitted by The Associated Press.

He estimated that there would be more than 784,000 applications for relief.

The USDA has since released a detailed analysis of how the department made its calculations.

The breakdown has stunned corn and wheat farmers who say the payments are uneven and won't do much of anything to help keep struggling farms afloat.

A lobbying group that represents wheat growers is challenging the way the administration determined payments for wheat farmers, who are set to receive 14 cents a bushel. Chandler Goule, CEO of the National Association of Wheat Growers, said the USDA assumed U.S. wheat would be sold to China this year when it made its calculations. But the assumption was flawed, he said.

China typically makes its requests for American wheat between March and June. U.S. wheat farmers have sold, on average, 20 million bushels of wheat to China over the past three years. But none came this year, Goule said, as Trump escalated his threatening rhetoric on trade with Beijing. He hopes the per-bushel rate for wheat goes up if there's a second round of payments.

"I am very certain that we will not sell any wheat to China this year," Goule said. "The window we sell in has come and gone."

The response among farmers has been mixed. While some are grateful for the help, most are eager for the trade disputes to be quickly resolved.

"Nobody wants to have an aid package. I mean, if you're a farmer you're in the business of producing a crop. We just want a fair price for it," said Joel Schreurs, a soybean and corn producer near Tyler in southwestern Minnesota who sits on the board of both the American Soybean Association and the Minnesota Soybean Growers Association.

Schreurs worries that it will be hard for farmers to get back the buyers they'll lose as a result of the trade wars. "And in the short term we have to find another home for those beans, otherwise they're going to pile up and it will keep prices depressed," he said. 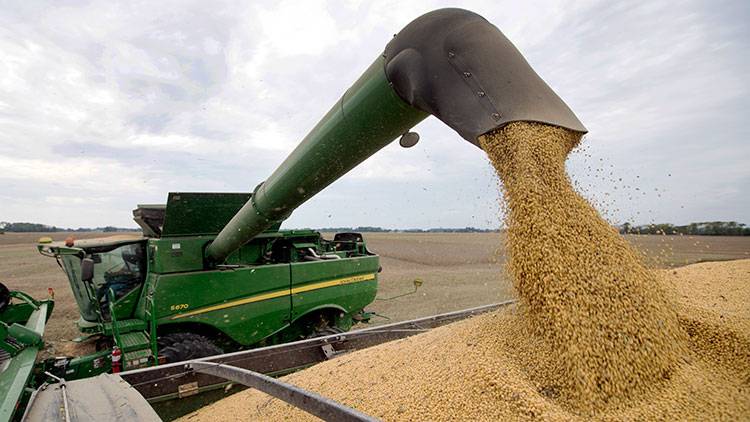 Mike Starkey offloads soybeans from his combine as he harvests his crops in Brownsburg, Ind., Friday, Sept. 21, 2018.The United States is scheduled to slap tariffs on $200 billion in Chinese imports Monday, adding to the more than $50 billion worth that already face U.S. import taxes. China has vowed to counterpunch with tariffs on $60 billion in U.S. goods. (AP Photo/Michael Conroy)

In the Midwest, growers typically farm both corn and soybeans. Those farmers would get payments for both under the program, which began sign-ups Sept. 4.

Perdue said checks could start going out as soon as the end of September for crops that have already been harvested; payouts are based on yield.

"Farmers always live in unpredictable times," he said. "They're very resilient, but obviously the longer trade issues go on the longer it bears on them regarding what is the future."

Jack Maloney says corn farmers will be getting so little in bailout aid that for roughly 200,000 bushels of corn a farmer would get only about $2,000 for their losses.

"That's not even beer money," said the Brownsburg, Indiana, corn and soybean grower.

Maloney, 62, began farming full time in 1978 and now has two employees. He said some fellow farmers are angry and upset.

"Agriculture has always been the butt of all the trade wars," he said, adding that this isn't the first time he's seen trade disruptions affect the agricultural markets.

Maloney said he had already cut back on expenses during the past three years and hasn't taken a paycheck from his farm for more than a year because of tough times before the trade war began. He said the recent tumult has dashed hopes for stabilizing agricultural markets anytime soon.

"We were seeing a little light at the end of the tunnel — the markets were improving a little," he said, "and then this tariff thing happened and this trade war."

Daniel Weinand worries the market downturn could be the death knell for his farm. Weinand, 30, grows corn, canola and yellow peas on 900 acres of rented land near Hazen, North Dakota. He said he expects to reap about 30,000 bushels of corn, and to receive about $300 in aid.

"A penny a bushel on corn, it's not that it's entirely worthless. But it almost is," he said. "I don't know how many more years I can weather."

Associated Press writers Richard Lardner in Washington, Rick Callahan in Indianapolis and Steve Karnowski in Minneapolis contributed to this report.

Tags:tarriffssoybeans
At WFYI, our goal is to cover stories that matter to you. Our reporting is rooted in facts. It considers all perspectives and is available to everyone. We don't have paywalls, but we do need support. So if unbiased, trusted journalism is important to you, please join us. Donate now.

Should Hoosiers Near Wind Farms Worry About Their Health?

It's not uncommon for wind farm projects to be contested,but there's not a lot of research that definitively links turbines to negative health outcomes.

More warm weather means trees are likely to hold on to their green leaves for longer - and increased droughts would make the colors more muted.