In August, the U.S. Department of Agriculture announced more than $1 billion of food would be purchased and distributed through nutrition assistance programs like The Emergency Food Assistance Program, or TEFAP. TEFAP funnels USDA food to food banks, which then distribute those products to participating pantries. Food banks say they’re grateful for more food, but there’s a problem: where to put it all.

“We knew we were getting a lot of cheese,” says Jack Warner, Food Finders’ director of operations. “We just didn’t know it was going to be a tractor trailer load until the last minute.”

Warner attributes the cheese-packed truck to a recent USDA purchase of $50 million worth of milk from American dairy farmers.

The so-called “trade mitigation program” was announced as part of a larger bailout for farmers hit hard by the Trump Administration’s ongoing tariff disputes – farmers now struggling to sell their product on the international market.

“You can always tell when the federal government is bailing out certain things through the TEFAP program,” Warner says. “When I first started, cranberries were really huge.”

Fortunately, Warner says, people really like shredded cheese, so it’s snapped up quickly at the pantries Food Finders supports. On this particular day, he’s down to four pallets from the original 60.

That means more perishable food is in danger of going bad before it can be eaten.

A delivery bottleneck at food pantries

Food Finders’s TEFAP delivery dates are mapped out through the end of the year. The trucks will haul food out to places like the New Hope Church in Howard County, the Good Samaritan Food Pantry in Jasper County, and the Family Crisis Center in Montgomery County.

Another issue? Many food pantries and agencies, staffed largely by volunteers, also have limited hours—and many limit the number of times clients can come for food in a month. That could impact how quickly they’re able to distribute the additional products they’re about to get.

“By all accounts, it's fantastic product,” says Emily Weikert Bryant, executive director of Feeding Indiana’s Hungry, the state association that supports Feeding America affiliate food banks like Food Finders. “We're excited to have it. But we're trying to figure out how to most effectively make sure that this gets out.”

“I think it's pretty much going to be a challenge for food banks across the spectrum, both large and small,” says Douglas Adam, Indiana’s TEFAP program director.

Adam says he never wants to turn food away. But he and colleagues around the country face the same problem: the federal government hasn’t allocated money to buy extra freezer space, and there’s also no extra cash to help deliver any extra food that arrives.

USDA officials released a statement saying the agency “…will work with states and program operators to ensure the additional food purchases are effectively and efficiently distributed to those in need.”

"To me, it's a great problem to have"

At Lafayette’s Tippecanoe County United Food Pantry, director Kathy Smith explains precisely what food is available for a small but growing crowd in the waiting area.

“If you were my client, I would say you’re a small family,” Smith says. “You can either have the spinach or the vegetarian beans. You can have one can of pears.”

She moves around the perimeter of the room, pointing out donated bread, a pile of apples, and a selection of frozen meat. Food Finders delivers food to the pantry twice a week. The space is 1,600 square feet, with a few small freezers (currently filled with bags of frozen blueberries), a refrigerator stacked with egg cartons, and coolers out front by a neat rectangle of shelves stacked with cans of vegetables.

Smith is thrilled at the idea of more food, and says if it comes down to it, they’ll just give more away to each client.

“There's no doubt that people need this food and want this food,” says Food Finders executive director Katy Bunder. “It's just a matter of getting it to the right place. It's always a logistics issue with food aid in this country.”

Back at the Food Finders warehouse, Jack Warner says he’ll make it work.

“To me, it’s a great problem to have, versus not having enough,” Warner says.

For now, he has to scrap his delivery schedule and start over for 2019. 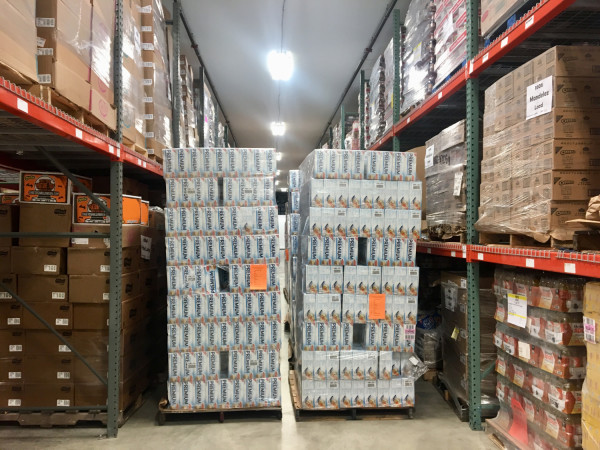