Three weeks after the election, Hoosier farmers are starting to define what they want to see in the next Farm Bill – a nearly $1 trillion federal budget package that funds the nation’s agricultural and nutritional safety net.

At an Indiana Farm Bureau forum on Monday, some producers said they were worried the Farm Bill might not even get reauthorized in 2018, or that the Donald Trump administration might cut it down as part of an effort to reduce spending and regulations.

No Farm Bill would mean no money for many agriculture and food programs – including crop insurance subsidies, conservation and food stamps. The Trump administration also promised to roll back international trade deals that have historically benefited agriculture.

“If we don’t start getting out there and talking to legislators and speaking up for ourselves, we’re gonna get left behind,” he says. “That’s something I think that’s seriously got to change, is just the American farmer getting involved.”

The Farm Bureau is gearing up to lobby for Farm Bill reforms in the coming year.

Gilles and other farmers say they wanted to see more reliable ways to calculate crop insurance payouts. Others hope for more incentives to participate in conservation programs.

Tags:AgricultureIndiana Farm BureauFarm Bill
Support independent journalism today. You rely on WFYI to stay informed, and we depend on you to make our work possible. Donate to power our nonprofit reporting today. Give now. 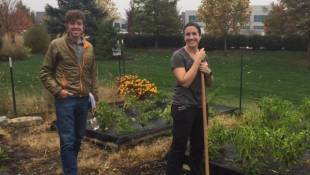 Garden To Pantry: How Indiana's Fight Against Hunger Is Evolving

The new face in fight against food insecurity in Indiana is food and garden education, and better communication between farm and pantry.