Ball State Economist: COVID Put US Economy Back To 2017 Levels

Ball State University’s economist says the coronavirus pandemic has dropped U.S. economic growth back to where it was in 2017.  The annual economic outlook says it will take a decade to get back to where we should be in 2021.

Ball State’s Michael Hicks says the U.S. economic growth of -4.6 percent in 2020 is the worst since 1946, when the country lost wartime manufacturing contracts.

“The Indiana economy is about 6.7 percent beneath where we thought it would be right now.  That is a stunning decline from expected levels," Hicks said. "I think we’ll catch back up to where we were in 2019 by the end of this year ‘til the spring of 2022.  Not where we should be, right, but where we were before COVID.”

To catch up to where we should have been by now, Hicks says it will take until the year 2030.

The economist is predicting about 2 percent positive economic growth in both 2021 and 2022.  But for this year, the start of growth will depend heavily on how fast the COVID-19 vaccine is distributed.

“We’ve lost a significant amount of businesses," Hicks said. "We’re going to continue to lose businesses, particularly those that employ those bottom-third of workers in restaurants and bars, until people are back using those services the way they did pre-COVID.”

Read More: How Will Indiana Distribute COVID-19 Vaccines? Here’s What You Need To Know

He expects only slow growth for the first half of the year. 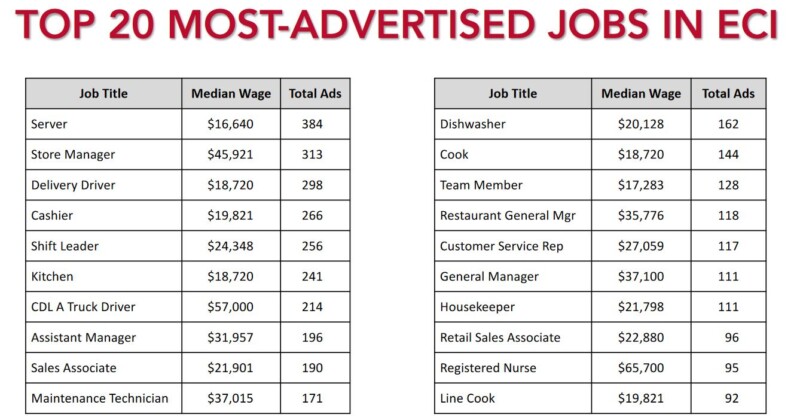 As for jobs, he says the top 20 jobs advertised for in the region are largely retail and service positions that pay lower wages.  The top three?  Servers, store managers, and delivery drivers.

“The question is: are these job postings representing employment growth or turnover?  And I’m afraid they mostly reflect turnover.”

Hicks says East Central Indiana will see negative employment growth through 2022.  He says job losses will also be seen if a new higher federal minimum wage is passed, but not as many as some politicians think.

“If we’d go to $10 an hour right now, I think we would have almost no job losses.  And I think if we went from the ‘tips-only minimum wage’ to a uniform minimum wage of $10 an hour, we would see much more rapid automation in the restaurant industry.” 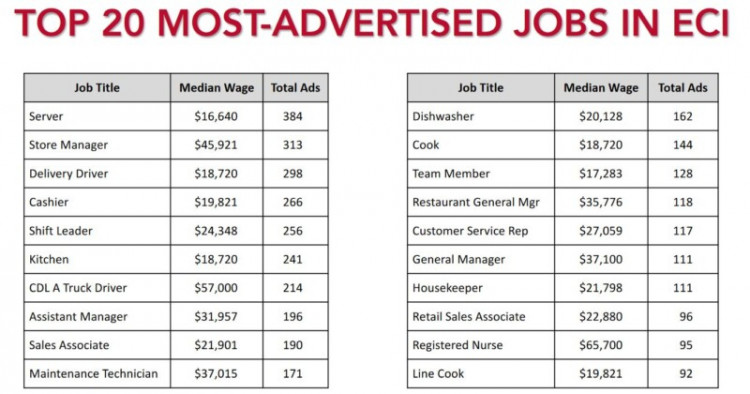 Tags:Ball State UniversityMichael HicksIndiana economy
Support independent journalism today. You rely on WFYI to stay informed, and we depend on you to make our work possible. Donate to power our nonprofit reporting today. Give now.