Ball State Economist: ECI Is Not The Region For Jobs

Ball State University’s economist says Indiana’s east central region is not the place Hoosiers are coming to look for work.  The annual economic forecast says the area should find other ways to bring in new residents. 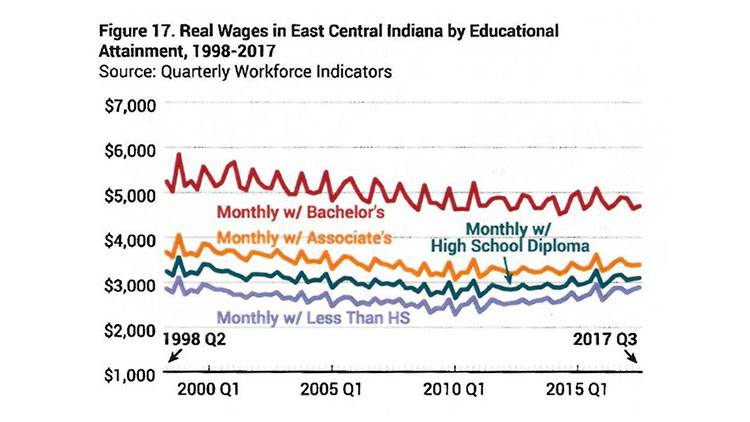 
Hicks says the region including Muncie and Anderson is paying college graduates less than the state average – about $5,000 a month in income versus a state average of $6,000.  And Indiana’s average is lower than the rest of the country.

Hicks says east central Indiana could attract better educated workers in schools, restaurants, and finance.  But since the region’s population has been steadily shrinking overall since the 1970’s, there won’t be enough new residents to change the trend.

The future, he says, is to attract people who work in or near Indianapolis.

“There are counties there that are growing in the top 5 percent of the fastest counties in the country.  And that’s really where our future growth is going to be in east central Indiana, is the connection between our counties and the growing Indianapolis area.  That’s bedroom communities to employment options in a larger city.”

Hick’s forecast for the nation’s economy as a whole for 2019 shows a first quarter growth of 2.6 percent.  Then he predicts a substantial slowdown to about 1.8 percent growth through the rest of the year.

Tags:MuncieAndersonBall State UniversityMichael Hicks
Support independent journalism today. You rely on WFYI to stay informed, and we depend on you to make our work possible. Donate to power our nonprofit reporting today. Give now.