Barred from Medicaid, some pregnant immigrants have few options for care

Sui, a program director for EMBARC, an Iowa-based nonprofit that supports immigrants, figured she could help these women navigate the health care system.

“Because I have been working with EMBARC for eight years, I thought, ‘Oh, maybe I can advocate because people might listen,’” she said. “I thought my voice would be heard by people, but in reality, it’s not at all.”

Even though the women are in the U.S. on visas, they couldn’t get Medicaid due to a federal law that bars many immigrants on visas and green cards from receiving public assistance, including Medicaid, for their first five years in the country. States can choose to opt people out of this waiting period when they’re pregnant. But many states — including the Midwest states of Missouri, Indiana and Iowa — haven’t done this.

This leaves many immigrants, like the women Sui was trying to help, with few, if any, options for affordable prenatal care.

Neither could get immediate, affordable coverage through plans offered by their husbands’ employers or the Affordable Care Act Marketplace. The employer-based coverage wouldn’t start for months, and high deductibles rendered ACA plans too pricey, even with subsidies, Sui said.

She found the only assistance the women could get was two months’ worth of “presumptive” Medicaid coverage, which they’d automatically get while they wait for their applications to be processed. They lost that coverage once the state determined they weren’t eligible due to their immigration status.

Outside of that, Sui said their only choice was to sign a contract with a local hospital agreeing to pay for prenatal care out of pocket.

While trying to navigate her choices, Sui said one woman didn’t receive any prenatal care during her first and second trimesters, and faced a steep bill when she finally did go in for an appointment.

Sui said EMBARC often hears from immigrants in similar situations who are shocked to learn they don’t qualify for Medicaid for prenatal care just because of their immigration status.

It discourages some from having children, she said.

‘It comes down to politics’

It was a part of the large policy that Clinton publicly opposed, saying he believed the provision had nothing to do with welfare reform and “legal” immigrants who “fall on hard times through no fault of their own” should be able to access public assistance.

“The five-year bar really came about as a cost-savings measure. As part of a broader attempt around welfare reform and immigration reform.” said Kelly Whitener, an associate professor with Georgetown University’s McCourt School of Public Policy’s Center for Children and Families.

The only way immigrants can bypass this waiting period is to become U.S. citizens, a process that typically takes years to qualify for and get through.

Clinton pledged to “fix” this provision, but that never happened. It has remained in effect ever since.

It wasn’t until more than a decade later that the federal government made a change to this policy under the 2009 Children’s Health Insurance Program Reauthorization Act, or CHIPRA, which allowed for states to opt immigrant children and pregnant women out of this waiting period for Medicaid.

As of July 2021, 34 states have opted to exempt children from this waiting period, and 24 states have done the same for women during their pregnancies, according to the U.S. Centers Medicare and Medicaid Services.

“It comes down to politics – that children are just a very politically palatable group,” Whitener said. “There's a lot of recognition that kids don't make decisions.”

Some states, like Illinois, have state-funded programs to support pregnant immigrants affected by this ban.

But others don’t offer this group any public insurance coverage options until they clear their first five years in the U.S. or obtain citizenship.

This has made the system even more confusing for immigrants, Whitener said.

“The obvious [issue] is that they're missing out on health care, which means missing out on visits – also means exposing families to really high medical bills and financial insecurity,” she said.

In 2019, Iowa lawmakers filed a bill that would allow pregnant women who are “lawfully residing” in the state to obtain Medicaid coverage without the five-year waiting period.

The bill made little movement in the legislature, but it came with a fiscal note that estimated 559 Iowans would be affected by the change annually. The move would have cost the Iowa Department of Human Services an estimated $939,000 to cover this group for the 2020 fiscal year, and about $739,000 for the 2021 fiscal year.

The note stated that Iowa is already paying for the birth under its short-term emergency Medicaid coverage program, which is for Iowans who don’t “meet citizenship, alien status or social security number requirements.”

“These costs may be offset by potential Medicaid savings due to preventing premature births and low birth weights,” the fiscal note said. 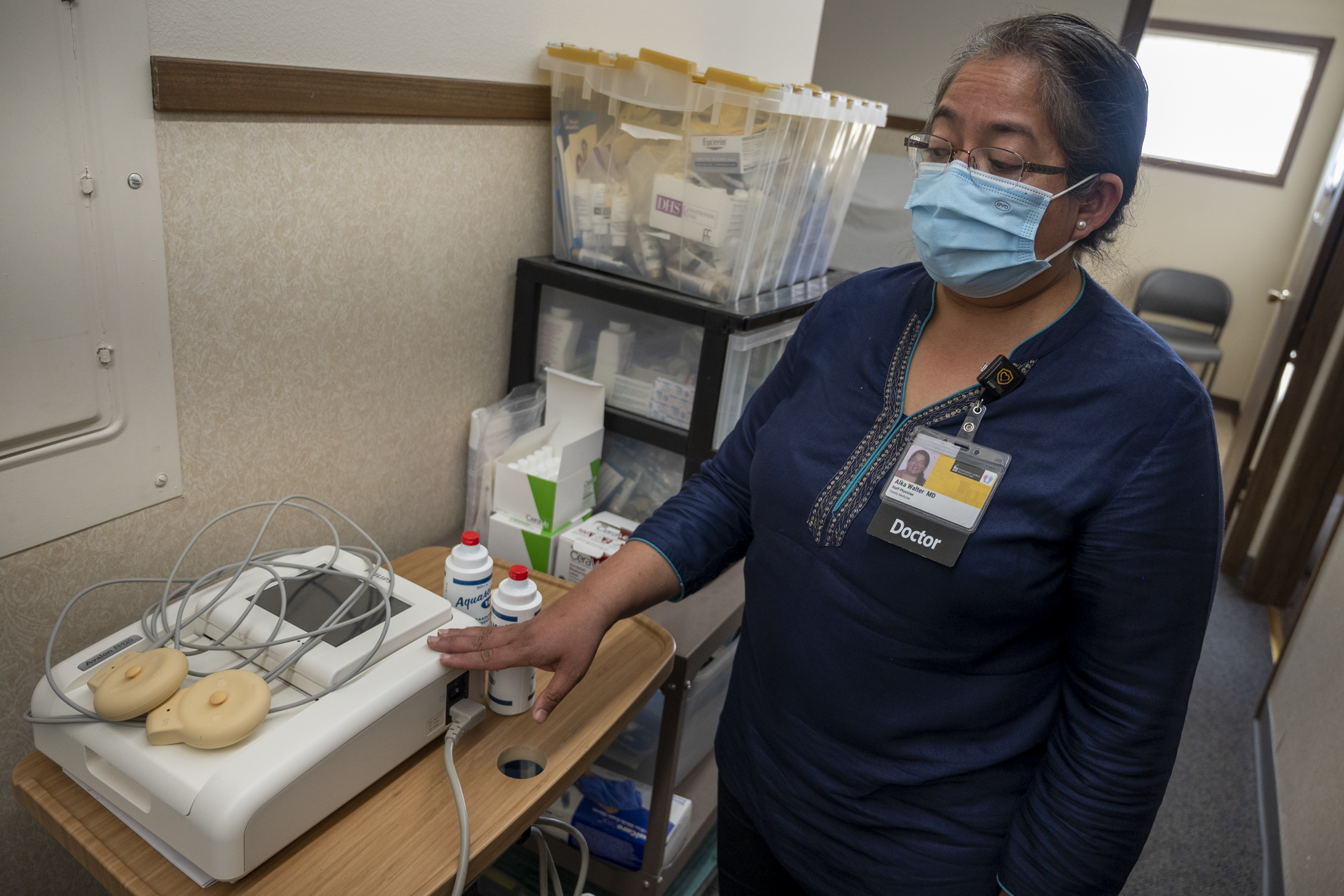 Immigrants affected by the five-year ban are more likely to be women of color, who have disproportionately higher rates of maternal mortality and infants with low birth rates as compared to White women.

Federal figures show nearly 14 percent of immigrants naturalized in the 2021 fiscal year were born in Mexico, followed by India, the Philippines, Cuba and the Dominican Republic. Immigrants from these countries made up 36 percent of all naturalizations.

At the Free Medical Clinic in Iowa City, doctors like Alka Walter work to provide pregnant clients who are uninsured or underinsured the best prenatal care possible. They see many immigrant patients under the five-year ban.

For Walter, a volunteer who helps run the clinic’s Thursday night prenatal clinic, this means navigating a confusing web of bureaucracy.

The Free Clinic will see patients until they’re about 20 weeks pregnant, she said.

Then they’ll sign them up for their two months of presumptive Medicaid coverage so they can have insurance to go to a larger, more well-equipped clinic, “and then try and get as much of their important prenatal care done – lab tests, blood type, and screen their growth in anatomy, ultrasound, [and see] if they need any consultations with any specialists,” Walter said.

When their 60-day Medicaid coverage runs out, they’ll go back to the Free Clinic until they give birth in a hospital, which is covered by Iowa’s emergency Medicaid coverage program, then return to the clinic for two months of postnatal care.

The Free Clinic’s approach to stitching together prenatal services worked for Ruth Mangabu, who came from the Democratic Republic of the Congo in 2019 on a diversity visa.

Two of her three children were born in Iowa.

Mangabu arrived in Iowa during her second pregnancy and said a local hospital referred her to the Free Clinic during her first prenatal visit when they realized she was under the five-year ban.

She said she received excellent care at the Free Clinic, which helped affirm her feeling that Iowa is her new permanent home.

“The medical care – it’s very good,” Mangabu said in her native French before switching to English, which she’s learning.

Mangabu expects her husband, who is wrapping up his business in the DRC, to join her family in Iowa in the near future.

Both of Mangabu’s pregnancies went smoothly, but the Free Clinic’s patchwork system can be more challenging for patients with high-risk pregnancies, Walter said, because they need additional expensive tests or ultrasounds on equipment the Free Clinic doesn’t have.

“Patients can't afford to get an ultrasound every week,” Walter said. “At that time then we monitor patients as closely as we can and compromise somewhere in between and make sure it's safe for the patient.”

The need for the Free Clinic’s prenatal services is increasing.

The clinic sees around a dozen patients at its Thursday night clinic and is continuously getting additional referrals, Walter said.

“If we had the resources and the time and the personnel, we could run this clinic twice a week, and we'd still have enough patients there,” Walter said. “We get referrals almost every day.”

This story comes from a partnership between Iowa Public Radio and Side Effects Public Media — a public health news collaborative based at WFYI. Follow Natalie on Twitter: @natalie_krebs.

Tags:Side Effects Public Mediamaternal heathImmigrationimmigrant healthmaternal mortaility
Support independent journalism today. You rely on WFYI to stay informed, and we depend on you to make our work possible. Donate to power our nonprofit reporting today. Give now.