Bartholomew County may try the unusual tactic of a residential property tax deduction to ease tensions between large livestock farms and nearby residents.

At a property tax appeals board hearing Tuesday, county assessor Lew Wilson says not many Indiana counties have tried using the tax code to tackle the effects of concentrated animal feeding operations, or CAFOs.

"I think it’s a little bit of new territory that we’ve got to deal with," he says.

The county is in that territory thanks to six residents from the small town of Hope, who appealed to the county to have their property values – and taxes – lowered.

That was after a hog CAFO moved in nearby. It’s placed legally, but the neighbors say it still affects their quality of life and will make their homes harder to sell.

Nancy Banta is one of the neighbors who appealed. She says the county’s decision to consider a flat deduction for neighbors within a certain distance of a CAFO is more than she had hoped for.

“It’s a very pleasant surprise," she says. "We weren’t expecting to be listened to. We had not been listened to in the past.”

The county plans to study the issue further, in order to move forward on Banta and her neighbors' appeal and the possible new tax deduction by February.

Tags:Agricultureproperty taxesCAFOBartholomew CountyHope
At WFYI, our goal is to cover stories that matter to you. Our reporting is rooted in facts. It considers all perspectives and is available to everyone. We don't have paywalls, but we do need support. So if unbiased, trusted journalism is important to you, please join us. Donate now. 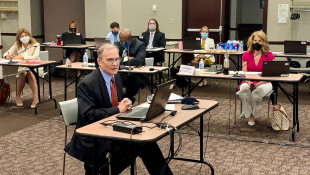 Indiana says it has spent or committed to spending less than $1 billion in federal CARES Act money out of the $2.4 billion it's received.
Read More