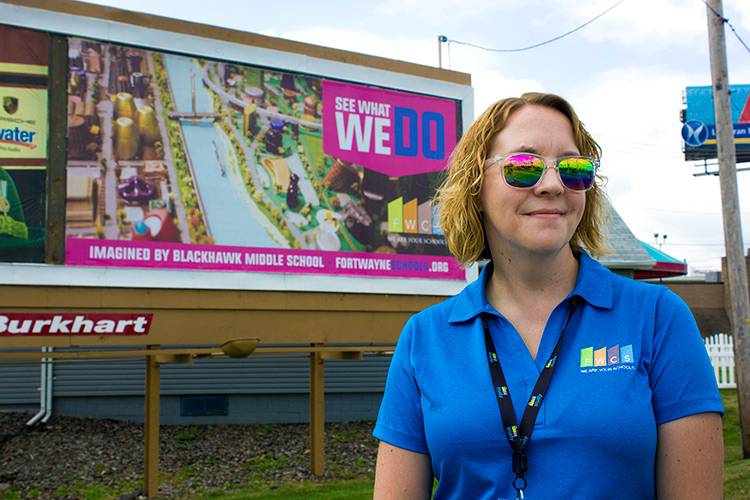 Schools will start soon, but where you live doesn’t necessarily determine where you go to school anymore. Families can choose where to go to school — private, charter or public school. The aim behind providing this choice? Proponents say it will force all schools to better themselves.

Whether it has done that remains controversial. But it has given birth to a new reality for public schools: with education competition, comes the need for education marketing.

“I don’t know when the city of Noblesville is planning on changing over street signs,” said Cooke, Noblesville Schools communications director. “But I hope to put a bug in their ear that it might be cool to have some black and gold street signs.”

Black and gold. The district’s colors.

In Noblesville, voters recently agreed to bump up property taxes to help fund the district. Cooke wants everyone in the small central Indiana city to feel connected to the schools.

The district relies on the community for funding, internships and students. So the district hired Cooke because of her private-sector marketing background. 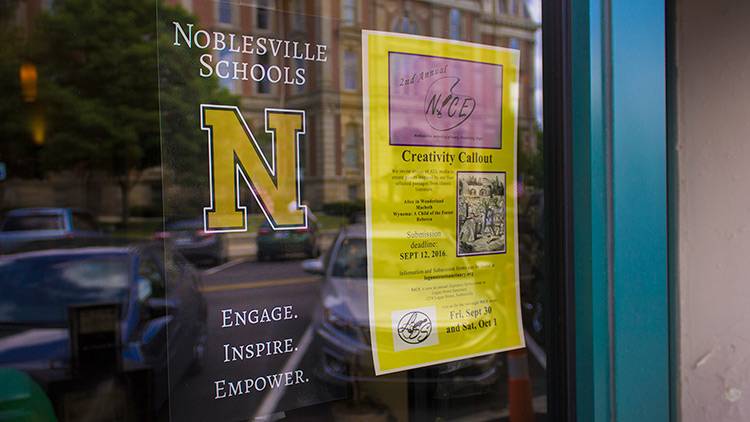 “When school starts you’ll see Noblesville school banners hanging on those posts,” Cooke said. “And we have a coffee shop over here that has a Noblesville Schools poster in the window.”

Plus, there will be community events, fliers and social media advertising. It’s deliberate marketing to keep schools on the community’s mind.

Two hours south, that marketing gets even more direct.

A Multimedia Approach to Advertising

Clarksville Community Schools developed an advertising campaign with an express purpose: drive students to their district.

Knott credits that advertising campaign with bringing 87 students to the district and over $435,000 in tuition support from the state for the district.

It’s a new place for public education. Gone are the days when a district’s public relations person worked in a world of press releases. Now, it’s largely marketing.

“It’s kind of the nature of the beast in education,” said Chad Lochmiller, assistant professor at Indiana University’s School of Education. “There’s really not an adequate level of funding to provide the level of educational services that all of our students need.”

But for some public districts, that means fewer students, and fewer dollars to keep their doors open.

Billboard, Outreach and Marketing to Survive

At Fort Wayne Community Schools, about 1,000 students have left the public district in recent years. They took $6 million dollars in state tuition with them.

On a busy road flanked by a shopping mall, FWCS spokesperson Klara Stockman points out a billboard with a bright pink border. 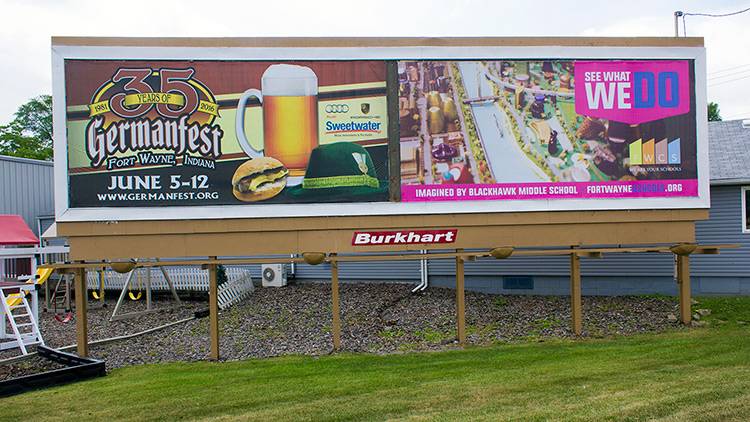 “This is the billboard. It says ‘Imagined by Black Hawk Middle School’,” Stockman said. “And then it’s got our logo and it’s got the ‘See What We Do’ which is our theme for this summer.”

Fort Wayne has the highest state-funded private school voucher use in the state. Roughly 5,000 students living in district borders use a voucher to attend private school. Stockman said it’s necessary for the public schools to market themselves.

“This is something that private and charter schools have been doing in all of their existence,” Stockman said. “And they’re doing it with taxpayer dollars now, as well.”

The district will spend $10,000 this summer on 15 billboards to dot the city. State funding from a gain of just two new students would pay for the billboards.

District representatives also reach out to families directly. At public places, like the public library, representatives hand out registration information and cups, rulers and pencils emblazoned with district logos. 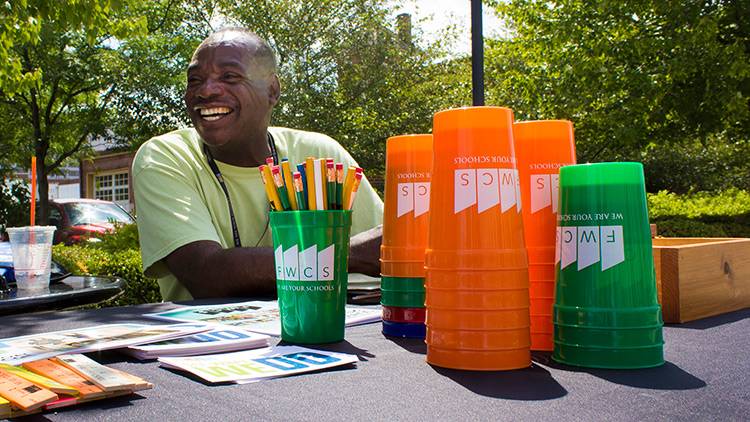 “His kids are homeschooled right now so I’m trying to encourage them to come back to FWCS,” Kelsaw said.

He’s seen advertisements for every type of school — private, charter and public.

“I’ve seen them all, but I’ve seen more of the private schools advertise over all than the public,” Bailey said. “The public schools are starting to get into that game though, I think, more than they used to.”

A FWCS billboard last year featured one of Bailey’s fellow bus drivers. Still he says marketing is just that: marketing.

“I view all advertising as, you know, presenting things as the way they want you to see it,” Bailey said. “I don’t know if I’d say it’s necessarily changed my opinion.”

Tags:Fort Wayneadvertisingschool choicemarketingNoblesvilleClarksville
At WFYI, our goal is to cover stories that matter to you. Our reporting is rooted in facts. It considers all perspectives and is available to everyone. We don't have paywalls, but we do need support. So if unbiased, trusted journalism is important to you, please join us. Donate now.

Less than 10 people were in Indianapolis Board of School Commissioners' boardroom at the district headquarters Thursday. It was a stark contrast to the past two months when meetings were standing room only as board members, parents and teachers argued about what is best for three city schools.