Fourth year medical students are getting ready to graduate and start their residencies in July. It’s been a long journey—and especially challenging for many Black students.

In a fully decorated community hall in Indianapolis, Jamel Hill and about a dozen relatives are gathering. On the side there is a laptop with a group Zoom video call that has the rest of the extended family—great grandparents and all. Hill is setting up two laptops.

“My family is huge. And so I am setting up one zoom for my family to see. And then I'm setting up the zoom so the school can announce,” he says.

Hill is a Black fourth year medical student at Indiana University. The family is anxiously waiting for Match Day announcement—when medical schools let each student know where they got accepted to continue their medical training after graduating.

When the announcement was made that Hill and his pregnant wife Jasmine are going to the University of Kentucky to do his physical medicine and rehabilitation residency, the room was filled with deafening happy screams. After all, it’s his dream job.

His mom Tonya hill can barely hold back her tears,

“I feel like crying because I'm so excited. And I'm so happy and proud,” she says. “And I am just ecstatic that they're close enough for us to get to. That's like a three and a half hour drive.”

Hill is joining a relatively small group. While Black Americans make up over 13 percent of the population, only 5 percent of doctors in the U.S. are Black. And Blacks made up only 8 percent of medical school applicants last year.

When he started classes he found that medical school doesn’t do nearly enough to explain the history and context behind health disparities affecting Black Americans, leaving Black students like him in a tough spot.

“You know, it's always awkward to have this discussion on why African Americans struggle with diabetes,” he says. “And being the only Black person in there, students nearby just kind of look over at you for answers. And it's like, you know, I'm not here for that, I'm here to learn.”

Working at the hospital was also challenging at times. It happened twice that during his clinic rotations, patients said they didn’t want the black doctor—meaning Hill—to see them.

“And I often, maybe for lack of a better explanation, just push that off to ignorance,” Hill says.

It was Black mentors-turned-friends that Hill met on the way that helped him push through. He recalls reaching out to two Black IU admissions officers after he got rejected. They took him under their wings, he said.

Another one is a young Black PhD candidate he met years earlier, when he was in a pipeline program helping first-generation college students applying to medical school.

The guy’s name was Antwoine Haywood.

“The first thing that people notice is the spelling of my name, compared to other Antoines, it's misspelled,” he says. “And this comes down to the fact that I grew up with a mother who was an immigrant and had a sixth grade education. I have six siblings and I lost my father to gun violence.”

When he reconnected with Hill, Haywood had his doctorate. He is currently the assistant dean of students at IU and an assistant professor of radiation oncology.

He gets what Black students like Hill go through. He too has felt like an outsider. He says it wasn’t until his mentor asked him not if — but when — he was getting his PhD, that he started feeling like he belonged.

“And my initial reaction was one where I was taken aback. It just didn't seem attainable to me or a possibility,” he says.

“There are lots of experiences I have had where I had to show resilience in the face of challenge but having someone there to offer guidance and support and reassurance even when things weren't going as expected made all the difference for me.”

He made it a point to do just that to IU’s Black students as much as he can. He says there are also some honest conversation being had at IU right now on diversity and health equity. He hopes that a new task force that the school is forming would ensure that diversity and equity are built into the institutional fabric and not just a one-off initiative.

Another of Haywood’s mentees is Alejandro Mongalo, a fourth year medical student who matched into internal medicine at Charles R. Drew University of Medicine and Science in Los Angeles, Calif.

A Los Angeles native, he started out as a model and Hollywood actor. But when approached his 30s he felt like being a doctor is how he can help his Black and brown community back home.

Mongalo’s parents are Black and immigrant Latinx. He is going to be the first doctor in the family. But his journey was anything but easy.

“From the very beginning, I felt like I stood out,” he says.

He recalls a class discussion about the link between genetics and some diseases. One student argued for tougher immigration policies to keep immigrants from bringing their diseases into the U.S.

"And those kind of comments when they're not checked in the classroom by the professor, or they are engaged with comical banter with other students, and or the professor, it is when [for] a person like me, who has immigrant family it feels not only hurtful, but I feel excluded,” he says.

Mongalo’s experience is not an anomaly. A study published in the New England Journal of Medicine shows 17 percent of medical residents in surgical programs in the U.S. face racism. Many choose not to report it for fear of retaliation, including through poor evaluations.

Such experiences took a toll on Mongalo—at one point he considered quitting. But mentors like Haywood gave him a hand.

Leading by example and mentorship were crucial for Hill and Mongalo's medical school journey and they hope to give back.

“I think for me, it was really important to show the people who are coming behind me that we can do this, you can do this, everything that you need is already within you,” Hill says.

Tags:Indiana UniveristyIU School of Medicinemedical schoolsystemic racismRacial equity
Support independent journalism today. You rely on WFYI to stay informed, and we depend on you to make our work possible. Donate to power our nonprofit reporting today. Give now.

Ahead of students returning to school, the Centers for Disease Control and Prevention is urging parents to get their students COVID-19 vaccines. It says the approach helps protect students and their families.
Read More 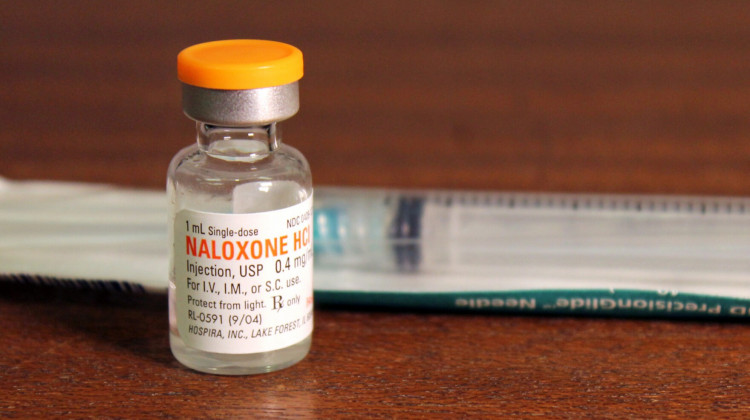