As Bloomington leaders look toward the city’s future, they’re trying to make getting around easier for residents – regardless of how they’re getting places. A proposed transportation plan puts an emphasis on making streets more pedestrian friendly, and includes major changes for Kirkwood Avenue.

Bloomington leaders are looking to other cities, including in Indiana, for inspiration.

Kirkwood Avenue is often considered the heart of Bloomington. It’s where both visitors and locals spend a lot of time and money.

But the iconic street could be transformed if the city adopts its draft transportation plan.

The long-range vision focuses on expanding multi-modal transportation. On Kirkwood, that means doing away with curbs and giving pedestrians priority. While cars would still be allowed, they would travel at slower speeds. Pedestrians could use the center of the pavement, which could also facilitate street festivals.

Several people spoke during a meeting Thursday night saying they like the idea. But resident Margaret Clements worries the idea doesn’t take into account people who have to drive. 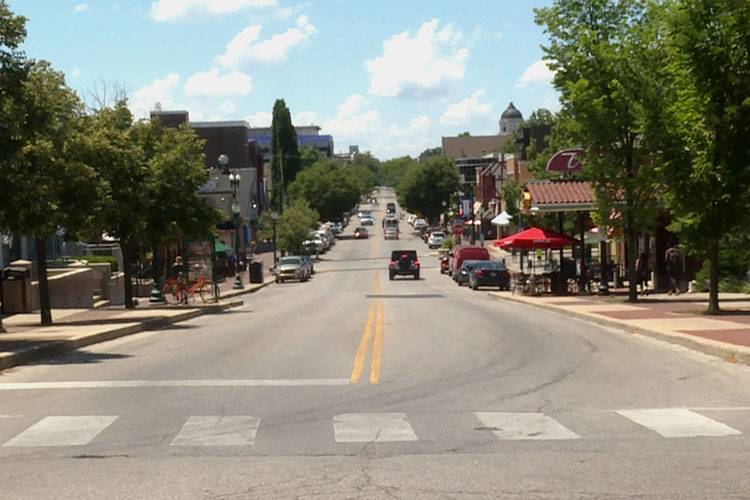 Cars would still be allowed on Kirkwood, but a shared street prioritizes pedestrians. (Barbara Brosher/WFIU-WTIU News)

Sagar Onta works for Toole Design Group, a firm the city’s hired to help with its draft transportation plan.

He says converting the streets to two-way traffic for the first time in decades is a big change, but one that will help businesses. It would require a lower speed limit on those roads.

“The slower the traffic is, the more streetscape that is improved, it’s going to help the economic vitality of downtown,” Onta says.

Some residents expressed concerns about parking being limited if the city converts College and Walnut to two-way roads. Others say delivery trucks could cause major disruptions.

But Greg Alexander goes downtown with his kids a lot and thinks the two-way streets could be safer.

“Switching that to two ways the drivers will have to look both ways and that will slow traffic down,” he says.

The plan also includes recommendations for 67 new street connections. Many of them would help provide some relief for other east-west roads in the city.

And, there are plans to extend the B-Line trail and create additional multi-use paths throughout Bloomington. 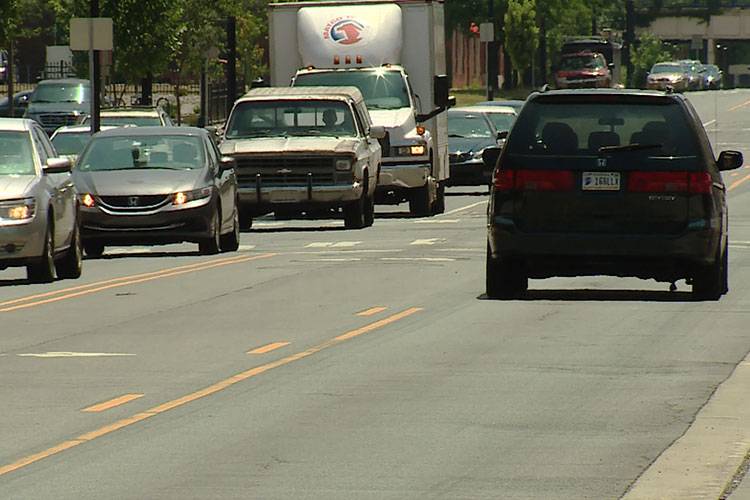 Several other Indiana cities have considered similar changes in recent years. Bloomington leaders and Toole Design Group mention South Bend as one example of what they consider a successful project.

Deputy Director of Public Works Jitin Kain says there’s been about $100 million in new investment downtown since then.

“The one-way streets were really highways through downtown. And what that did is it created a way to evacuate the downtown,” Kain says. “We’re trying to create a more connected system, a more pedestrian friendly system.”

In addition to converting about eight miles of one-way streets to two-ways, the city narrowed roads, reduced speeds and changed the way pedestrians and cyclists use the roadway.

There are now protected bike lanes off the road, and a separate, designated area for walkers and runners.

“One of the things we’re trying to do with the Smart Streets initiative is create a more vibrant downtown,” Kain says. “And when we say vibrant, we want to make sure all modes of transportation have equal access.”

While leaders view the project as a success, there were hiccups along the way. The construction created congestion downtown, and the new traffic patterns themselves resulted in backups at points.

Some residents just couldn’t be won over – arguing the investment could have been better spent.

They’re all lessons Bloomington leaders could learn from as they create a vision for their city’s future.

By many accounts, the downtown is already thriving. That leads some to question whether changes to spur economic development are needed.

“If you drive up from Kirkwood on College, on Walnut, and then turn around it’s almost totally developed,” says resident Dave Dirk. “So I don’t think that’s an issue for this city.”

But Onta says the changes could spur development north and south of downtown, where there aren’t as many businesses.

The city will likely make changes to its plan based on resident feedback. It could go before the plan commission for approval as early as September.

The next phase of the project involves calculating the cost of implementing the changes.

Tags:Bloomingtoninfrastructuretransportation
Support independent journalism today. You rely on WFYI to stay informed, and we depend on you to make our work possible. Donate to power our nonprofit reporting today. Give now.

The Indiana Department of Environmental Management said proposed changes at the Metalworking Lubricants Co. may reduce pollution. But residents are skeptical anything will change.
Read More

The Vera Institute of Justice published a study earlier this month, which focused on Vigo County. The study found that while jail populations are decreasing in urban areas, they are increasing in rural ones like Vigo County. Researchers say it’s not due to an increase in crime, but rather jail expansions and policy decisions.
Read More

A recent investigative series reported by the Indianapolis Star found that people are dying in Indiana jails at an alarming rate.
Read More