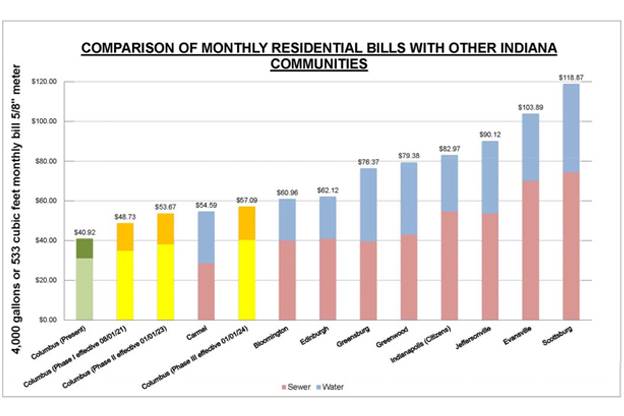 Columbus residents are on track to see their water and sewer bills increase about 40 percent in the next three years beginning July 1.

The city council gave its first-reading approval on the rate adjustment Tuesday night. Final approval is scheduled for June 15.

Mayor Jim Lienhoop says it’s been 25 years since rates have increased, and the city is running out of cash for improvements.

“We've got some sewer lines in the city that are 100 years old, and they're doing what you would think a sewer line 100 years old would do in many cases, they collapse or we've ended up with sinkholes.”

Lienhoop says the city also needs to add sewer capacity on the west side serving hotels and restaurants near I-65.

City leaders say Columbus has one of the least expensive sewer and water rates in the state.

Tags:ColumbusBartholomew Countyutilitieswaterwater rates
Support independent journalism today. You rely on WFYI to stay informed, and we depend on you to make our work possible. Donate to power our nonprofit reporting today. Give now.