The central message of Monday’s state of higher education address is one Hoosiers have heard before; it focused on the need for a more skilled workforce.

“More than ever, the imperative to develop human capital is the most critical issue facing the state of Indiana,” she says.

In order to do that, she says education officials and employers need to work together.

Lubbers says declining enrollment is a serious issue facing colleges and universities, but she says one of Indiana’s biggest issues is preparing more people for the transition from high school to college, and continued education for adults.

She stressed the importance of higher education adapting to meet the needs of more adult learners and being more personalized to different student needs.

“The needs of the individual learner should drive the delivery system, whether that’s the 18-year-old college freshman or the 35-year-old returning adult,” she says.

Listen to the full address

Lubbers says Indiana’s largest industries are likely to see more automated jobs, but people with more education have a lower risk of losing their jobs to automation. She says it’s especially important to do things differently in higher education with rapid technological change.

“If we fail to do so,” she says, “we will be contributing to greater income disparity and social stratification.”

Lubbers says the commission will focus largely on strategy this year, and boost efforts to get more people connected with a higher learning credential. The commission, and Gov. Holcomb, aim for at least 60 percent of Hoosiers earning some kind of college credential by 2025.

Tags:Indiana Commission for Higher EducationTeresa Lubbers
Support independent journalism today. You rely on WFYI to stay informed, and we depend on you to make our work possible. Donate to power our nonprofit reporting today. Give now. 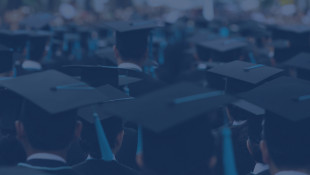 The Indiana Commissioner for Higher Education delivers the annual State of Education and Workforce address, sharing updates regarding the Commission's strategic plan.