Cost For Thanksgiving Dinner Higher This Year, But About Average 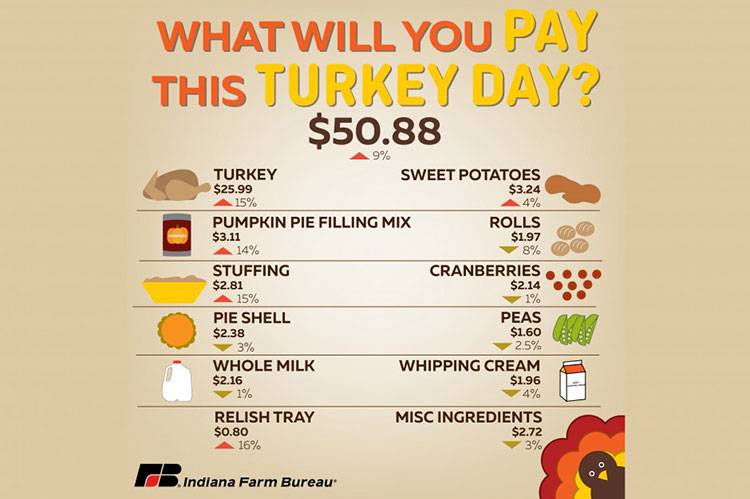 A traditional Thanksgiving dinner will cost Hoosiers a lot more than last year, but the price increases aren’t that significant when compared to 2015.

A Thanksgiving dinner for 10 people will cost Hoosiers $50.88 this year, according to the Indiana Farm Bureau’s annual market basket survey.

That’s 9 percent higher than buying the same foods last year. But the Farm Bureau says 2016 prices were historically low, so prices this year are actually right about average.

Second Vice President Isabella Chism says they aren’t sure why food was so cheap last year.

“There are so many different things that come into play when we look at those, and if it happens to be, as people tend to call it now, the perfect storm, you have everything that comes together to make those prices lower,” Chism says.

About half of that total cost is for a 16-pound turkey, which will cost you about $26 this year. The rest includes ingredients for stuffing, pie, rolls and veggies.

The national average cost for Thanksgiving dinner this year is about 3 percent less than here in Indiana. 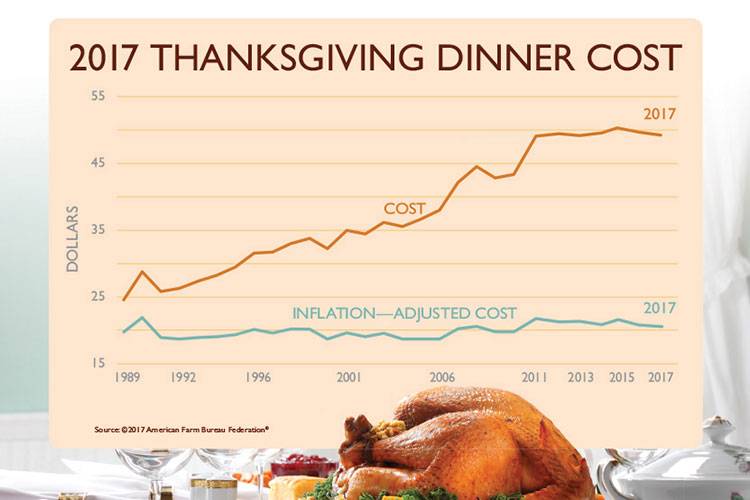 Chism says prices can vary widely across the country, and even within the state itself.

“You have to look at the transportation costs as to where they’re going, you have to look at varieties that are available at the locales that the people are shopping,” Chism says. “So in some rural communities they may have very few choices and that’s the price and that’s what you get. Whereas in other communities, like even for me shopping in Kokomo, Indiana, I have more choices than some people perhaps down in Greene County or in Sullivan, Indiana.”

When it comes to Hoosier farmers, Chism says they aren’t getting as much for their products as they used to. In the late 70s, farmers got about a third of each dollar consumers spent on food.

“And now it’s 16 to 17 cents for that same dollar that’s being spent on that same food,” she says. “So what we are looking at when you see that is a dramatic difference for the farmer. And we’re out there looking for those bargains at the grocery store just like everybody else is.”

At the same time, Chism says Thanksgiving can be good for the state’s economy. Indiana ranks fourth in the nation for turkey production and turkeys consume about 15 percent of all soybean meal fed to livestock in Indiana.

Tags:Indiana Farm BureauThanksgivingfood prices
Support independent journalism today. You rely on WFYI to stay informed, and we depend on you to make our work possible. Donate to power our nonprofit reporting today. Give now.