Marion County Prosecutor Terry Curry says Attorney General Curtis Hill was “plainly wrong” when he asked a court to block an investigation by the Inspector General and halt the appointment of a special prosecutor.

Four women accused Hill of groping them at a party in March.

Hill’s attorneys asked a county judge not to appoint a special prosecutor after Curry, citing a conflict, asked for one. And they say the Inspector General doesn’t have the authority to investigate the allegations.

Legislative leaders and the governor asked for that investigation, which is underway.

In a court filing Thursday, Curry calls it a “dubious proposition” that someone merely suspected of a crime could challenge the authority of an investigating agency or the appointment of a special prosecutor.

Tags:Curtis HillTerry CurryMarion County ProsecutorIndiana Inspector GeneralIndiana Attorney General
Support independent journalism today. You rely on WFYI to stay informed, and we depend on you to make our work possible. Donate to power our nonprofit reporting today. Give now. 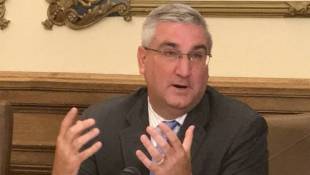 Holcomb Says No Choice But To Call For Hill's Resignation

The governor says he believes the four women who've accused the state attorney general of groping them at a party in March.