The number of tips regarding the Delphi homicides case has doubled since the Wednesday release of an audio recording from one of the victims’ cell phones.

ISP Sergeant Tony Slocum says the release of the audio recording plus a monetary award for information caused the influx of tips.

Slocum says cases are often solved with the help of information from the public.

“A lot of the tips have allowed us to actually mark suspects off our list so-to-speak,” Slocum says. “But, we’re looking for the tip that gives us a suspect and/or suspects that we can hold accountable for the murder of Liberty German and Abigail Williams.”

The reward for information leading to the arrest of a suspect has also increased to $50,000.

ISP Chief Public Information Officer Dave Bursten says the police are urging people not to rationalize away any feeling of familiarity they may get from the picture or audio.

“Don’t think, ‘Well gosh, that person could never do that.’ Call us. Give us the tip. We will keep your information anonymous,” Bursten says. “We will go investigate it, and the worst thing that’ll happen is they’ll be inconvenienced for a period of time and we can rule them out as a suspect. Or, it could be the tip that breaks the case open.”

The bodies of 14-year-old Liberty German and 13-year-Old Abigail Williams were found on Valentine’s Day, a day after they failed to return from a hike near the Delphi Historic Trail in Carroll County.

Police ask citizens who may have information to call the Delphi Murder Tip Line at (844) 459-5786 or email abbyandlibbytip@cacoshrf.com.

Tags:DelphiCarroll CountyLiberty GermanAbigail WilliamsDelphi Historic Trail
Support independent journalism today. You rely on WFYI to stay informed, and we depend on you to make our work possible. Donate to power our nonprofit reporting today. Give now. 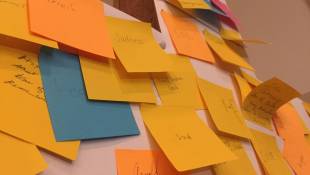 The quick thinking of one of two murdered Delphi teens may give law enforcement the necessary clue needed to find the girls' killer.