Community members at a vigil in South Bend Monday night are looking for answers following the shooting death of 53-year-old Eric Logan by a police officer early Sunday morning. (Officials have two conflicting birth dates for Logan -- 1964 or 1965.)

Logan, who is black, was shot in the parking lot of Central High Apartments on the corner of Colfax Avenue and Williams Street. He was transported in a police vehicle to a hospital where he died.

The family question details about the official story including why Logan was transported in a police vehicle and not taken in an ambulance.

The officer was identified as Sgt. Ryan O’Neill. He is white. He has been placed on administrative leave.

The South Bend police department recently received funding for body cameras for its officers. O’Neill’s body camera was not recording at the time of the incident.

City Common Council Member Oliver Davis says that budgeting for body cameras was to provide more information in situations like these.

No other video evidence from a dashboard camera or nearby security cameras has been found.

An investigation by the St. Joseph County Metro Homicide Unit is ongoing.

“We just want to make sure that this is investigated as well as we can do it,” Prosecutor Ken Cotter said.  He added that information will continue to be released.

Officials say O’Neill was responding to a call about someone breaking into cars.

The official timeline of events:

Cotter said O’Neill told investigators that, upon arriving at the scene, Logan was leaning into a car. O’Neill asked if that was his car. Logan responded that it was. O’Neill noticed Logan was holding a purse and a large knife. Logan raised the knife. O’Neill fired two shots.

Six cars in the vicinity had been broken into. 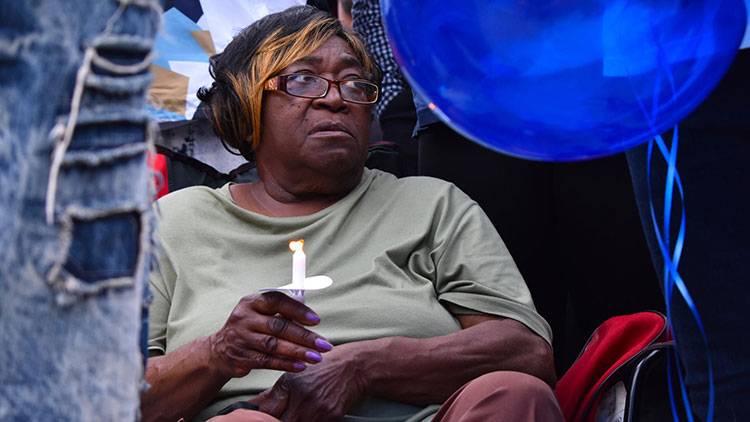 Shirley Logan holds a candle at a vigil for her son Eric Logan outside Central High Apartments in South Bend on Monday, June 17, 2019. (Justin Hicks/IPB News)

Those at a vigil question Monday night are skeptical of the official version of events.

Family members say Logan had just left his brother’s house and was walking toward his mother’s apartment on Washington Street. They say Logan did not carry a knife and was not a thief, but did have a prior history of drug use.

Council Member Regina Williams-Preston says the community needs to look forward and hold the police department and other officials accountable for what happened. She says they should take steps so this does not happen again.

A spokesperson with the family says they have information that tells a different story than the one the St. Joseph County Prosecutor shared. They say they will release it in the next few days.

Tags:South BendSt. Joseph CountySouth Bend Police Department
Support independent journalism today. You rely on WFYI to stay informed, and we depend on you to make our work possible. Donate to power our nonprofit reporting today. Give now.

The Sierra Club has released its latest report ranking electric utilities based on their climate commitments. The rankings are based on utilities plans to retire coal plants, build enough renewable energy, and avoid adding new natural gas plants by 2030.
Read More

Two of the three candidates vying to become Indianas next Secretary of State will meet in a debate Monday. Republican Diego Morales continues to dodge public events that feature his fellow candidates.
Read More