In the small southern Indiana city of New Albany, school board meetings are normally nothing special.

“A regular board meeting? It's typically maybe a few teachers, administrators who have something to contribute to the meeting. The local newspaper, and that's about it,” said Elaine Murphy, president of the board for New Albany-Floyd County Schools.

The elected board members discuss, vote on budgets and other plans before the meeting is quietly wrapped up.

But nothing prepared Murphy for the school board’s last meeting on Aug. 9.

Crowds of parents and community members filled the hall at the district office, about five miles from the Kentucky border. Murphy estimates around 188 people were there. One man held a flag for the anti-government, militia movement Three Percenters. Murphy was heckled and called a liar, among other names.

“It's sad to say that, you know, now when I see someone come in with a flag and a flagpole, I'm thinking, well, that's a potential weapon,” Murphy said. “I've seen that before. And that caused some anxiety.”

The main message behind the anger and emotion is clear: Don’t require face coverings in schools for students.

But a few days after the meeting, the New Albany-Floyd County superintendent announced masks would be required in all schools if local transmission rates reached a certain infection threshold set by the state. On Monday, the infection rate required all staff and students to wear a mask.

Gov. Eric Holcomb and state health leaders said they will not issue COVID mandates for schools this year. In the recent legislative session, lawmakers passed legislation that requires local health departments to receive approval for COVID mandates, such as face masks in schools, from local governing bodies.

Now local school board members like Murphy are on the frontline of what is a health crisis at its core.

Some school board members and superintendents across the state speak of a tough spot they’re put in. Some convey a message of confidence that things will be under control soon, but others question why public health officials are not making these decisions in the middle of a resurging global pandemic.

Les Huddle, the superintendent of Lafayette School Corporation where masks are currently required, said it was easier to enforce masks last year because of the governor’s mandate. But now school boards are relying on health department recommendations, rather than mandates, to make decisions about a highly divisive issue like masks, which puts them under a lot of pressure.

In July, the U.S. Centers for Disease Control and Prevention and the American Academy of Pediatrics recommended that people older than age 2 should wear masks in schools, regardless of vaccination status. Adolescents younger than 12 are not eligible for any of the available vaccines yet.

As these debates continue, the health factors facing schools are rapidly changing. The Indiana Department of Health reported 3,500 new COVID-19 cases among K-12 students on Aug. 23 — that’s double the cases from the previous week.

At New Albany-Floyd County Schools, there are more than 100 positive COVID-19 cases and more than 1,000 students in quarantine, according to the most recent report.

Recorded videos of school board meetings across Indiana and the nation show what look like battlegrounds. Chaos and aggression engulf what were once lowkey, monotonous board meetings. And in the process, it’s turning residents of small communities like New Albany against each other.

Murphy is in her 60s. She is slender, with short blond hair and striking turquoise eyes. She has light make up that does not hide her laugh lines but complements her features. When she speaks there is a sense of diction in her voice but her eyes sometimes tear up revealing the deep emotions behind.

She worked in New Albany schools her entire career. She started out as a special education teacher and then became a principal. When she decided to run for school board, politics or ideology was not on her mind.

When the pandemic began, Murphy and her board members found themselves making decisions around health, safety, remote learning and other issues they never expected. As the pandemic continued, the debate about those issues changed.

“At this point, there are people that don't trust elected officials, they just don't. And I think as someone who's been elected I have to continually work on: ‘Yes, I am trustworthy. Yes, I will make good decisions for you and your family,’” she said.

The school that was once her safe haven, now leaves Murphy and her family fearing for her safety.

Ryan Gunterman, Murphy’s 41-year-old son, had seen videos of how some school board meetings across the country descend into chaos and sometimes aggression. So, he was worried about his mother, and he drove two hours south from Bloomington to be with her on the day of the school board meeting.

“I took her in my car because I didn’t want any of the protesters to know her car and mark it,” he said. “We then went in from the side entrance. I had to sit there and listen to people say terrible things about my mother.”

After the meeting ended, Gunterman took his mother in his car and kept circling around where she lives for 30 minutes. He didn’t want anyone to be following them to her house. He stayed the night too.

Now, Murphy keeps a baseball bat next to her house door per her son’s request. She still has one question for the parents who showed up at the board meeting: how can they all work together and find a middle ground? 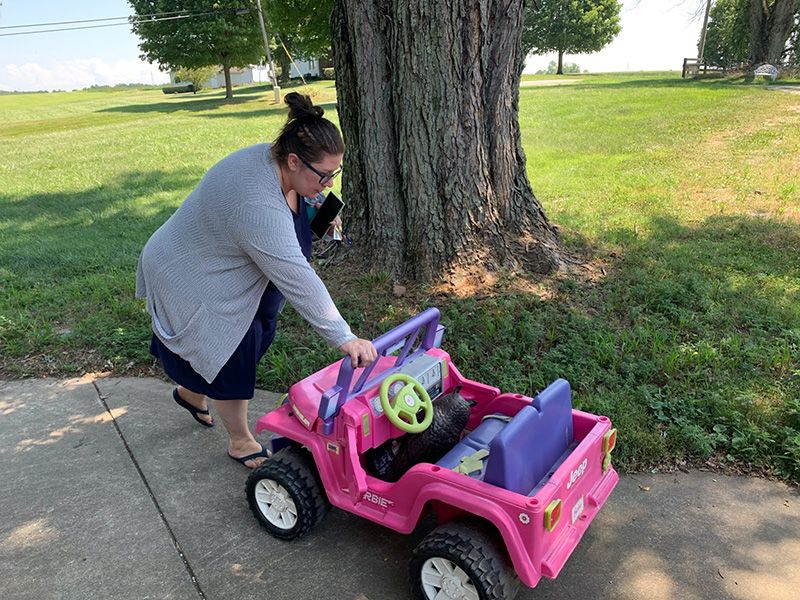 One of the most vocal parents during that New Albany-Floyd County school board meeting lives a few miles away from Murphy — a woman named Heather. She has a 2-year-old boy and a 9-year-old girl who goes to one of the county’s schools. She asked that her last name not be mentioned because she fears for her job and her children’s safety.

The fridge in her kitchen is covered in colorful magnets from different family trips across the country as well as family photos and drawings. Her daughter is a competitive gymnast and, as she describes her, a sweet, pleasing child.

Heather’s answer to Murphy’s question is simple but offers no leeway: “You send your kid with a mask. I'll send mine without one. I think that is the middle ground.”

Parents and protesters at the school board meeting were holding signs and wearing T-shirts that said, “my kid, my choice” and “my body, my choice”.

“Government has no authority to tell you what you can and cannot do with your body,” she said.

But equating an exclusively personal decision like pregnancy or abortion to not wearing masks during a global pandemic might be a bit of a stretch, health experts say.

“Wearing a mask now is a matter of community health, not personal health,” said Richard Kuhn, director of the Purdue Institute of Inflammation, Immunology and Infectious Disease.

Heather is reading an influx of small-scope studies from all over the world, which are mostly peer-reviewed and published in reputable journals, but some aren’t. And they may offer different guidance, such as whether children should wear masks.

Now, parents are demanding that school boards weigh that alternative data and federal health recommendations. But the current CDC guidance is clear: Kids should wear masks in schools because data shows masks limit the spread of the virus.

Heather disagrees and she is not shy to express that at school board meetings. And she is not alone. Facebook groups that have parents opposed to masking in schools have many posts and comments mistrustful of the CDC and the science it endorses. 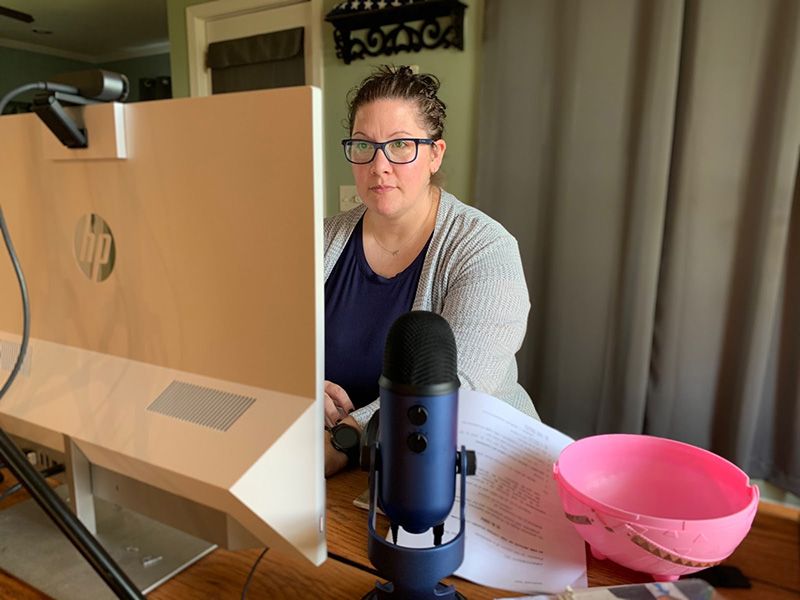 Heather is active politically. Not far from a neatly organized set of Peppa Pig figurines are some printouts about the FBI's surveillance of a former Donald J. Trump campaign adviser.

She has a microphone next to her desktop computer which she uses to record a homegrown political podcast.

Still, she says this one issue — of not requiring masks in schools — is not about politics for her.

Her daughter needs to wear glasses to protect her eyes from turning in when she reads or does school work. She had an eye surgery when she was 4 years old.

“And they overcorrected a little too much. So over the course of the last year, because of wearing masks, and it fogging up her glasses and her sweating on her face, she's gotten into this really bad habit where she'll lift them up over her head,” Heather said.

“And so I took her back to the ophthalmologist over the summer, and she's like, ‘Heather, you have got to keep her glasses on her face. Or she's going to have to have surgery again.’”

For many parents last school year was a challenge. But for Heather, especially so. Her house does not have access to high-speed internet.

“So I use this little hotspot for all of my internet stuff. Some people are like ‘why don't you want to keep your kid at home?’ I would absolutely keep my kid at home if I had high-speed internet out here,” she said as she held a small square-shaped black device in her hand.

When schools were shut down last year, she would have to take her daughter to her work office to get her school work done. With the current color-coded alert system the school district is using to mandate masks, Heather said she sees schools going virtual down the line. And she is adamantly against that now.

She does not shy away from expressing her anti-mask mandate stance and mistrust of health official recommendations on social media and public meetings — but it comes at a price.

“There are parents that are already actively trying to get some of us fired, they're actively targeting us as parents,” she said.

Heather said she had a friendly relation with the parents who are now trying to get her fired.

The response to COVID is testing the limits of this small community in the same way parents and school boards across the state, and nation, continue to argue. For now it seems most elected leaders and parents, like Murphy and Heather, are not ready to find common ground.

Tags:COVID-19K-12mask mandatemasksparentsschool boardcoronavirus
Support independent journalism today. You rely on WFYI to stay informed, and we depend on you to make our work possible. Donate to power our nonprofit reporting today. Give now. 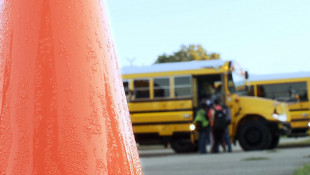 The Indiana Department of Health's school cases dashboard updates every Monday. This week it recorded 3,504 new student COVID-19 cases -- 3,028 of which were reported in the last seven days. 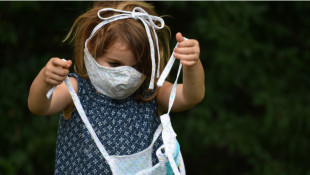 Indiana, like many states in the U.S., is experiencing a rapid increase in the number of children in hospitals due to COVID-19. One in 38 kids with a positive COVID-19 test are hospitalized in Indiana.