A documentary film team in Indiana hopes to reduce stigma around addiction. The film, The Addict’s Wake, is set in Brown County and sheds light on the opioid epidemic in Indiana.

The documentary was filmed in 2019 and 2020 and focuses on how opioid addiction affects individuals, families and communities. Producer Lisa Hall said the documentary is about hope.

“I believe that this is the first step to healing communities,” Hall said. “And this is across our nation. This is a national pandemic of great proportion.”

Hall hopes the film makes talking about substance use and addiction easier.

“If we don't tell these stories, we're not going to get healthier,” Hall said. “Things have to be brought into the light, communities have to shed light on their pain and the struggle and the battle of addiction so that the community can get healthier as a whole.”

Hall is working on a new version of the documentary for students that will be out in 2023.

“We have this interest, an outcry for this educational version, something that will really help prevent this,” Hall said.

Lissi Lobb hopes to get as many Hoosiers as possible to watch the film. Lobb is the behavioral health program director of Anthem Blue Cross and Blue Shield, which has hosted screenings across the state.

“Brown County, those are our neighbors,” Lobb said. “This isn't, you know, someplace far off, away from us. No, we are touched by it every single day.”

Overdose deaths in Indiana have reached record highs. Indiana had the 13th most overdose deaths in the nation in 2020, according to the U.S. Centers for Disease Control. An estimated 2,755 Hoosiers died of drug overdoses last year, which experts largely attribute to the pervasiveness of the powerful synthetic opioid fentanyl.

The next free screening of The Addict’s Wake will take place at the Indiana Historical Society on Thurs., Nov. 17, starting at 5:30. A panel discussion will follow the screening.

Tags:opioid epidemicopioid overdoseopioid use disordersubstance usesubstance use disorder
Support independent journalism today. You rely on WFYI to stay informed, and we depend on you to make our work possible. Donate to power our nonprofit reporting today. Give now. 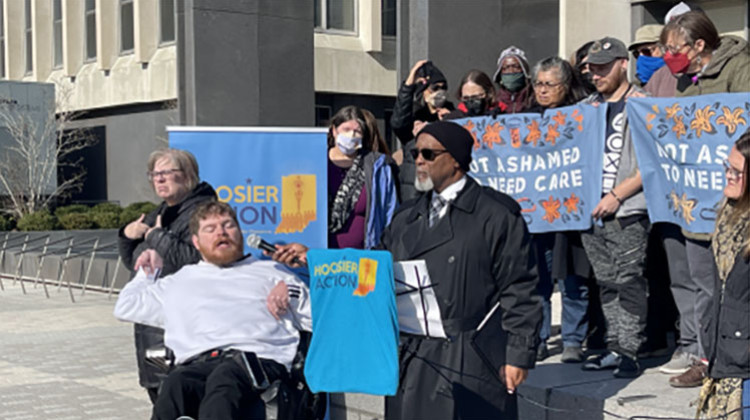 More than 30 people gathered outside the City-County Council building in downtown Indianapolis to demand the Marion County Health and Hospital Corporation withdraw its Supreme Court petition.