As the COVID-19 pandemic continues to disrupt the lives of millions of Americans, it’s also triggering an alarming increase in violence against Black women, advocates say.

“We’ve seen a surge of need in housing and crisis calls. We’ve also seen a surge in past clients reaching out for additional emotional and financial support,” says Jacqueline Willet, well-being services coordinator at Coburn Place.

The Indianapolis-based organization offers transitional housing as well as legal and emotional support services for domestic violence survivors. From March to December 2020, the organization served 50% more people than in all of 2019.

Now, the waitlist of families seeking housing is getting longer. There is over a year’s wait before some women and children can find a safe place to live, Willet says.

Other organizations involved in the issue are seeing similar changes.

And many women are using social media and crowdfunding websites such as GoFundMe to seek financial help so they can leave an abusive partner. Some share harrowing text exchanges where their intimate partners threaten to harm or kill them.

Black women are especially vulnerable. Even before the pandemic, they were 2.5 times more likely to experience domestic violence than white women, according to data from the U.S. Department of Justice.

Danyette Smith, a Black woman who founded the nonprofit Silent No More, understands this disparity all too well. She keeps an eye on social media posts calling for help, as well as reports local police receive. She gets in touch with the survivors and connects them to resources.

Sometimes, she delivers a sobering speech at a victim’s funeral to raise awareness about domestic violence. She says it’s needed in the Black community, where women are taught to stay tight-lipped about such matters.

Summarizing her speech, she says: “I can almost guarantee if it’s 100 of you in here, then you know, one of you three have been a victim of domestic violence.” That leads the audience to “look around. It’s more of a wake-up call not necessarily just for the family, but for those who are sitting in there — the neighbor, the person sitting next to you who could be experiencing domestic violence, and they’re just quiet.”

'I have been in your shoes'

Smith, a 38-year-old mother of two, is a survivor of domestic violence. And she was quiet about it for 12 years. Her ex-husband pointed a gun to her head and struck her so hard that she currently has plates in her eyes to hold her cornea in place.

“When I went to the hospital because I had a fracture, I told [the doctors and my family] that I had been jumped by someone else,” she recalls.

Fear — and a little bit of hope — kept her silent. Domestic abuse is not clear cut, and it can sometimes be confusing and difficult for a victim to recognize, she says.

“Most of the things that we see on TV is, you know, a dad coming home from work, he’s drinking alcohol, and he beats his wife every day. But that wasn’t the case,” Smith says of her decade of abuse.

“It was like I get hit this week and then it can go for another six weeks and I never get hit again,” she recalls. “And then bam, the cycle starts again. And they may go for another four months with nothing. So in that time, you hope it’s not going to happen. And then it comes again.”

She describes a “honeymoon stage” when an abuser treats a partner so well that the victim might feel the abuse won’t happen again. “So it just tends to ignite that hope all over again, like, ‘Okay, this time, he’s going to change.’ So I just stay silent. I was embarrassed as well.”

But one time — when she was slow to reply to her husband’s text messages while busy at work — everything changed for her.

She received a text saying, “I am coming to blow your brains out.”

She saw his white sedan pull up by her office and he had a shotgun in his hand. She felt humiliated and terrified. She called the police — a move that changed her life. She filed a restraining order and never went back to him.

Indianapolis organizations like the Domestic Violence Network are putting more resources into better representation of Black women as well as the LGBTQ+ community in their training programs.

According to a report from that organization, Black women are less likely to seek support when faced with domestic violence.

Willet of Coburn Place says many Black women are afraid to complain to the police because of distrust and fear that they might not be believed. Or they worry the situation might escalate if officers are called to the scene.

Cecily Johnson, director of strategic initiatives at the Domestic Violence Network, says the group recognizes the contentious relationship Black women might have with local police. She says law enforcement is making progress, thanks in part to training provided by organizations like hers.

She describes it this way: “Understanding the differences of interacting with certain communities, how can we help bridge any kind of gaps? How can we help with communication? How can we help make them more comfortable when they see law enforcement?”

Meanwhile, Smith of Silent No More wants other women to know that breaking the cycle of abuse is the first step.

She says, “There are resources out here that can not only break you free, and get you free from domestic violence, but also get you self-sufficient when you need to move into a new apartment, and you don’t have money for the deposit in the first month. So please, please contact somebody.”

This story was reported as part of a partnership between WFYI, Side Effects Public Media and the Indianapolis Recorder. Contact Farah Yousry at fyousry@wfyi.org. Follow her on Twitter @Farah_Yoursrym.

Tags:coronavirusCOVID-19domestic violence
Support independent journalism today. You rely on WFYI to stay informed, and we depend on you to make our work possible. Donate to power our nonprofit reporting today. Give now. 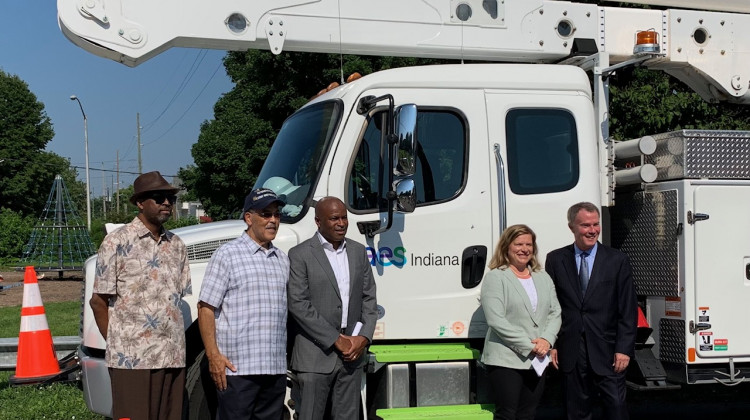 The program has replaced 27,000 old street lights with LED lights to improve safety and efficiency.