Grant Hartley is a fourth grader. He loves playing with Legos after school and says his favorite subject is gym.

Grant likes school, but he struggles sometimes – he has dyslexia.

For some people with dyslexia, reading typed words on a page is just as frustrating as trying to read a bowl of alphabet soup.

“It’s kind of hard like you got to figure out like which one would make the best sense in a sentence,” he says.

Grant has taken the state’s elementary reading exam – the IREAD – three times. The first time he didn't pass, he was distraught, because that meant summer school, and another test.

“I already did it once that should have been it. Like, it was just kind of sad to do it again,” he says.

Third graders can’t move on to fourth grade reading if they don’t pass the IREAD. So kids who don’t pass or qualify for a waiver, like Grant, go to a few weeks of summer school to study for the test and try again.

Leading up to the IREAD, Grant struggled with simple words, like “they” or “could.” His mom, Joellyn Hartley, quizzed him constantly, with a flip chart she made herself.

“Before I knew he was dyslexic I would say, ‘buddy it’s right here we just went over this word,’” she says.

Uncovering the root of Grant’s reading struggles, just the word dyslexia, proved to be a battle of its own. At one point, Hartley thought her son had a brain tumor, and his teachers didn’t know what to tell her.

“And she just said even if he is dyslexic that he wouldn’t be able to be identified until at least fifth grade,” she says.

Eventually, Hartley stumbled onto it by sheer luck: she was talking to a friend whose son also has dyslexia, and their symptoms were eerily similar. 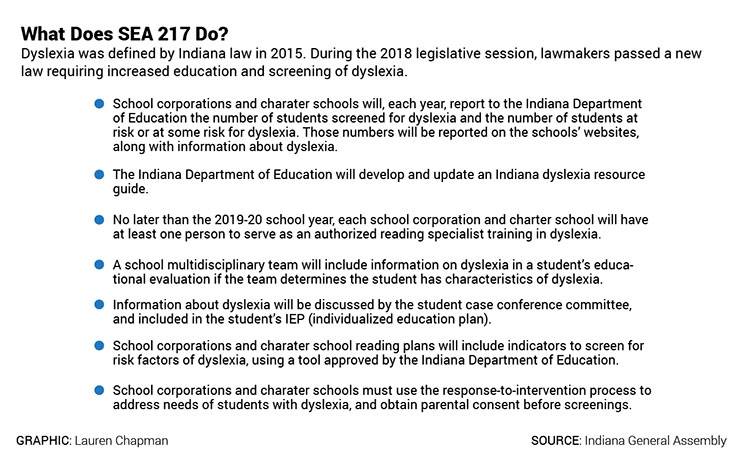 After Grant was diagnosed, Hartley trained to become a specialist. Now, she works with schools to help identify and tutor dyslexic kids.

“I just thought you know if I can prevent one more child to go through what mine has or another parent if I can help them and guide them, I want to do that,” she says

But not every school has a specialist like Hartley. Many advocates for dyslexia awareness say a certain theme has persisted for years: schools and teachers hesitant to use the word dyslexia at all, unsure of exactly why a student isn’t making progress.

Former educator and dyslexia tutor Mary Binnion says the disconnect has largely been due to a lack of information.

“I think we were all sort of in the dark about why this kid seems to be so smart, I mean they can talk to you about anything, and yet they can’t do paper pencil, read a book kind of things," she says.

Dyslexia was first defined in Indiana law in 2015 – just three years ago. And the numbers vary, but anywhere between 10 and 20 percent of kids live with the learning disability.

Binnion says the passage of a dyslexia bill this year is a huge step forward. It requires all schools to screen kids in kindergarten, first, or second grade for key traits associated with dyslexia, and, every school corporation will have a reading specialist trained in dyslexia by 2019.

“It’s far better, the earlier ID’d and the earlier remediated, the better they’re going to be," Binnion says. "You probably are not going to see their dyslexia rear its ugly head unless it’s some other like, right and left or something like that." 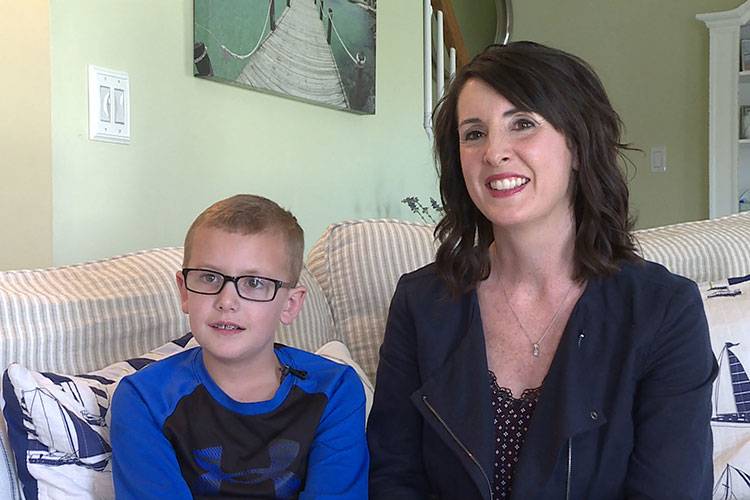 Teachers will get more information around dyslexia under the new law, but it’s unclear how comprehensive teacher training will be.

Binnion tutors dyslexic kids with her husband four days a week, at a small church outside of Muncie. She uses what’s called a structured literacy, multi-sensory approach.

“Structured literacy that’s multisensory and getting them involved in what we’re learning is good for everybody,” she says.

Multisensory instruction takes time though – not something m any teachers have to spare, and the new law doesn’t change the way Indiana educators teach all kids to read.

Binnion and Grant’s mom Joellyn Hartley are optimistic, especially since just identifying kids at an earlier age, is a big deal.

“Every kindergartner, first and second grader in any public or charter school in the state of Indiana will now have to be screened for dyslexia, and so those ones who may have fallen through the cracks, that hopefully now this will prevent that,” Hartley says.

Because getting the right kind of help for those kids early on, can go a long way. After finishing his tutoring program this year, Grant passed the IREAD. Totally unrelated to a new five-syllable word he can read now: “procrastination.”

Tags:dyslexiaIREAD
At WFYI, our goal is to cover stories that matter to you. Our reporting is rooted in facts. It considers all perspectives and is available to everyone. We don't have paywalls, but we do need support. So if unbiased, trusted journalism is important to you, please join us. Donate now.

The money is coming to K-12 schools, as well as colleges and universities, as grant awards made through the Governor's Emergency Education Relief fund.
Read More

This is the second round of funding in the Next Level Connections Broadband Grant Program that will connect Hoosiers to affordable and dependable internet.
Read More

An early learning nonprofit has awarded more than $13.1 million in grant money to child care and early learning providers around Indiana, to help them navigate the ongoing COVID-19 pandemic.
Read More