Absentee voting began Tuesday for the May 8 primary that will determine which candidates' names appear on Indiana's ballot for the Nov. 6 general election.

Voters can cast absentee in-person ballots until noon on May 7 at their county clerk's office, although some counties allow in-person absentee voting at multiple locations.

Voters can also vote by mail by requesting an absentee ballot online at www.indianavoters.com or from their county clerk's office.

Tags:2018 May primaryelection 2018early voting
Support independent journalism today. You rely on WFYI to stay informed, and we depend on you to make our work possible. Donate to power our nonprofit reporting today. Give now. 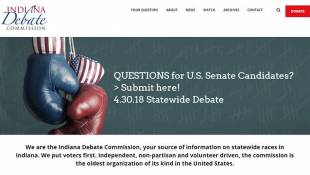 The nonpartisan Indiana Debate Commission is hosting the first televised debate for race for the Republican nomination on April 30.