March 31 was supposed to be the deadline for families in a lead-contaminated public housing complex in East Chicago, Indiana to move out, or be sent to temporary housing. But some are still appealing those assignments – and they won’t be forced out until their complaints are settled.

Hearings for residents who filed grievances about their temporary housing assignments will be held Monday April 3 and Tuesday April 4.

Federal officials say families in West Calumet Housing Complex who aren’t satisfied with their temporary housing assignments won’t have to move until after hearings with housing authority officials.

But residents’ attorney Emily Coffey says the threat of the deadline still took a toll. She says some residents were forced to settle for less-than-ideal circumstances.

“Residents are having to make a choice between some pretty difficult things. Some are choosing to move in with relatives or friends rather than take the unit ECHA has offered them,” Coffey says.

ECHA is the East Chicago Housing Authority. It’s offered residents units in town, in Gary, and on the Southside of Chicago. And tenant Keeshea Daniels is facing that choice – between moving in with her grandmother, or to Chicago. She says she understands why most of her neighbors are already gone.

“Cause they didn’t want to be forced out, and I’m sure a lot of us don’t want that. Because who wants somebody coming in, sitting their stuff outside – I don’t think nobody wants that,” Daniels says.

By Monday, Daniels says she’ll know if she has to move in with her grandmother or a potential home in Zone 3.

“Hopefully everything works out so I can rest – I just want to be able to go to sleep and rest,” Daniels says. “It’s just this situation with the eviction or ‘forced move,’ I haven’t been able to rest. And it would just be so nice to be in a nice house where you can rest. And I’m not able to do that right now.”

As of March 30, HUD reported 287 of the original 332 families in the complex had moved or secured new housing. HUD expects all families will have moved by Friday, April 7.

Tags:East ChicagoleadWest Calumet Housing Complexlead contamination
Support independent journalism today. You rely on WFYI to stay informed, and we depend on you to make our work possible. Donate to power our nonprofit reporting today. Give now. 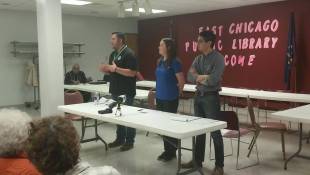 Many asked about the remediation process, but some expressed concerns over the EPA's commitment to residents in the lead-contaminated Superfund.