ELKHART, Ind. (AP) — A northern Indiana police chief who downplayed the beating of a handcuffed suspect by two officers and faced other controversies over discipline has resigned.

The letter states he's "not perfect and have made mistakes," but "always tried to make sure we were making decisions that would be best for the department."

The South Bend Tribune published a story Sunday about an officer with a drunken-driving conviction who was promoted and never disciplined. The newspaper and ProPublica have been cooperating on a series of stories about the Elkhart County justice system that raised questions about the department.

Last month, Neese placed Windbigler on 30-day suspension after the release of a video showing the beating.

Tags:ElkhartElkhart Police DepartmentElkhart County
Support independent journalism today. You rely on WFYI to stay informed, and we depend on you to make our work possible. Donate to power our nonprofit reporting today. Give now.

The U.S. Supreme Court is set to hear arguments Wednesday in a case that could upend federal elections across the country.
Read More 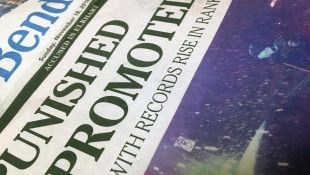 About two weeks ago the South Bend Tribune published a series of investigative reports about issues within the justice system in Elkhart County.