One year ago, Eric Logan, a black man from South Bend, was shot and killed by a white city police officer who didn’t activate his body camera. The community is still dealing with the aftermath of the fatal shooting and is finding ways to remember Logan on the anniversary of his death.

A South Bend police officer shot Logan on June 16, 2019 while responding to a call of someone breaking into cars. The officer says Logan approached him with a knife, which is when he opened fire. The officer did not have his body camera turned on.

Shirley Newbill, Logan’s mother, is remembering the fatal shooting one year later. She says not enough has been done to bring justice after her son’s death.

“My son was killed," she says. "We know that. But they haven’t done anything to the police that killed him and I want that officer to go to jail for what they did to my son. I don’t have a son now. They took it all away from me.”

Newbill is spending the day trying to keep her son’s memory alive.

“[Logan] would probably be washing the car, barbecuing, talking to his friends, trying to take me somewhere," she says. "He always brought me something back if he didn’t take me with him. He was good to me.”

Newbill plans to attend a vigil Tuesday night with other community members to honor Logan.

She says more needs to change in South Bend so what happened to her son doesn’t happen again.

The officer who shot and killed Logan is no longer on the South Bend Police force. A special prosecutor declared the shooting was justified after an investigation, so the officer was not charged.

South Bend Mayor James Mueller announced Monday some plans for police reform in the near future.

Tags:Eric LoganSouth BendSouth Bend Police Departmentracial justice
Support independent journalism today. You rely on WFYI to stay informed, and we depend on you to make our work possible. Donate to power our nonprofit reporting today. Give now.

Indiana will no longer move up the deadline for counties to install a vital election security measure on their voting machines.
Read More 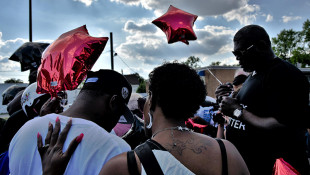 Tuesday marked the one year anniversary of the shooting death of Eric Logan by a white South Bend police officer. Some of Logans family and close friends held a memorial service Tuesday night and marched to demand justice.